OH NO, WHAT HAVE I DONE?

Right after the picture below was taken I said to myself "Sh*t, what have I done?" It was not the first and will not be the last occasion I buy more plants than I have time to get into the ground. 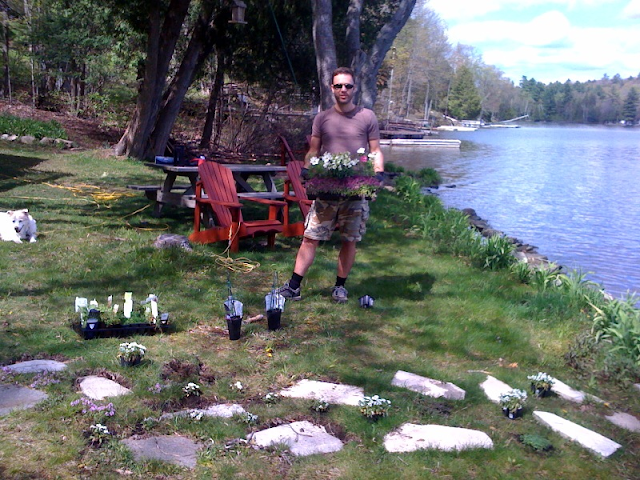 It may not look like much, but you have to keep in mind that digging up the lawn for this flagstone path is not the same as tucking something into a nicely prepared bed.  This involved some serious digging.

In addition I've started adding annuals to my garden, previously a no-no: 'Who has the time to invest in things that won't come back next year?' I thought.
The exception has been these barrels at the road which we moved there a few years ago from beside the water up to the road.  Here they keep people from turning around on the soft, muddy edge and diverting the ditch away from the creek out onto the road.  They have worked pretty well and as with the other containers this year have been planted with simple white impatiens and ferns (that have come up again from last year). 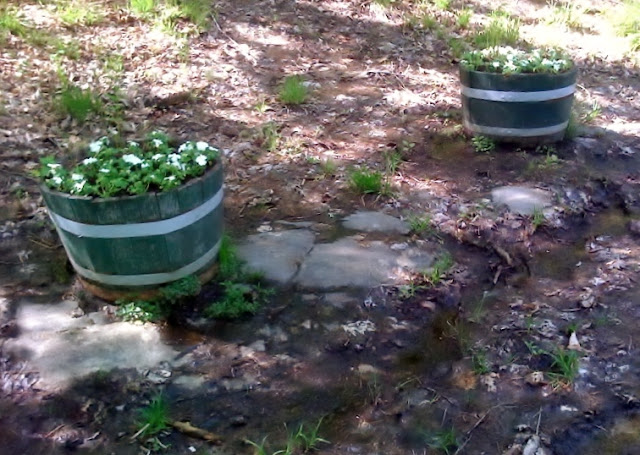 The inevitable slide to include annuals began last year when my husband added planters to the cottage deck.  I was not interested previously given how much there was to do already and how beautiful and green the surroundings already are, but I have to admit that bringing a little greenery up onto the deck was a nice addition.  Last year he planted pansies and since the deadheading mostly landed with me, I took over the planters from him this year to avoid that fate again. 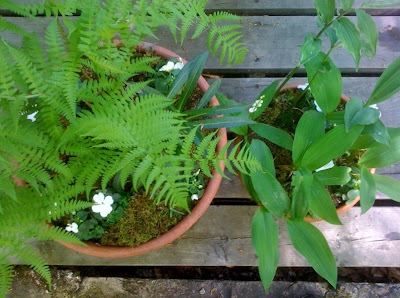 I have mostly woodsy containers but added white Impatiens to make them a bit more elegant than the surrounding woods, a good compromise for those who prefer flowers in their pots.

The next day I brought home snapdragons to add to the day lilies and iris in the Lakefront Garden - where they look amazing now, long before the rest will bloom - and Cosmos which I have added to the evergreen patch at the end of the gravel path, and purple Alyssum which I added to the very old stump.  Hard to see now, but I'm sure it will look great as it fills out, with the sparse white Alyssum at the top defending against the encroaching and more plentiful purple from down below. 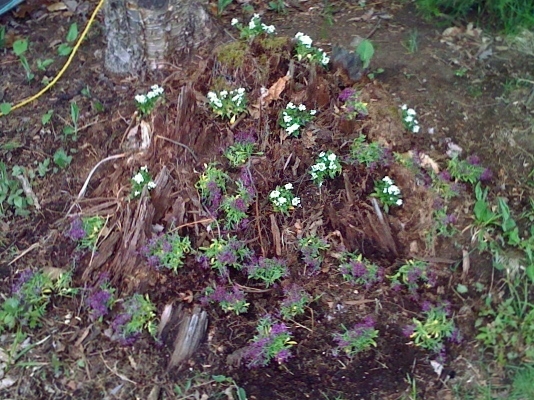 One day the evergreens will fill in, but for now I think that area can use some help and as long as the Cosmos poke out from the leaf mulch I hope that they will keep with the wild feeling of the place.  I need to triple the number in there so far, but it is quick and easy work.

With the Ostrich Ferns coming up nicely behind them they'll provide some wispy colour in the foreground.  We'll check in on them again later in the season.
Posted by astudentgardener at 23:54