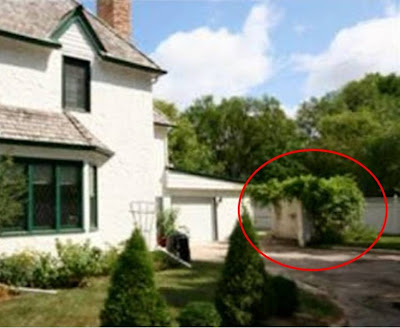 We have settled on calling the 2-sided structure attached to the garage our "cantina". 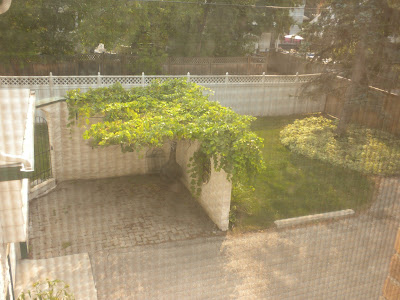 In white stucco and covered by a grape vine it feels practically mediterranean, and I know we will sit and have some drinks in cooler weather around the chiminea.
So 'cantina' it is. 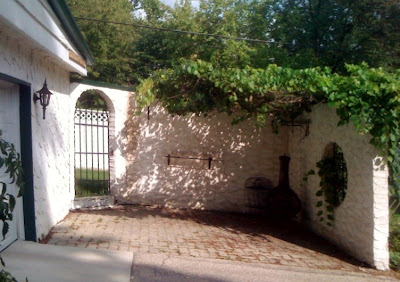 I would have left the open wall facing the backyard, but it is what it is and I appreciate its quirkiness. 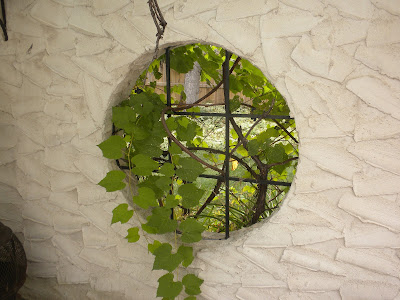 And one thing it is is cute.
Great detail like this round window with wrought iron bars. 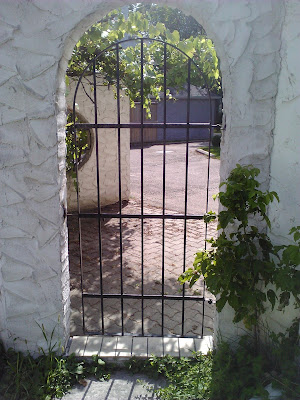 And its matching curved gate seen here from the backyard. 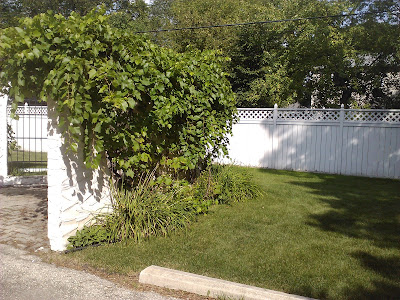 There is a garden bed around it on both sides. 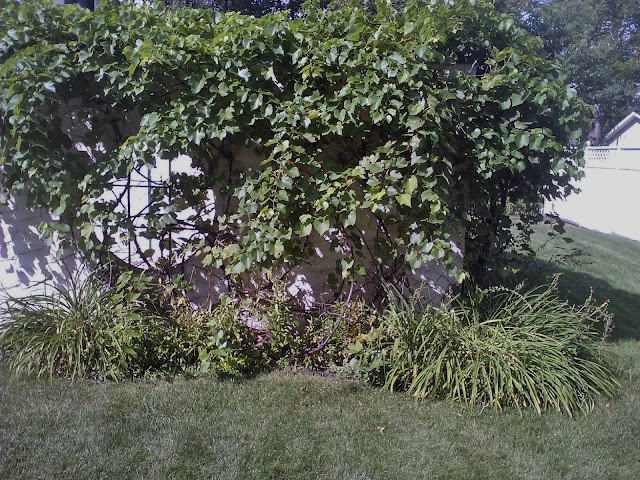 I am going to have to learn about and then write a post about how to prune a grape vine.   I certainly did not expect to find one in zone 3 where I did not know they survived. 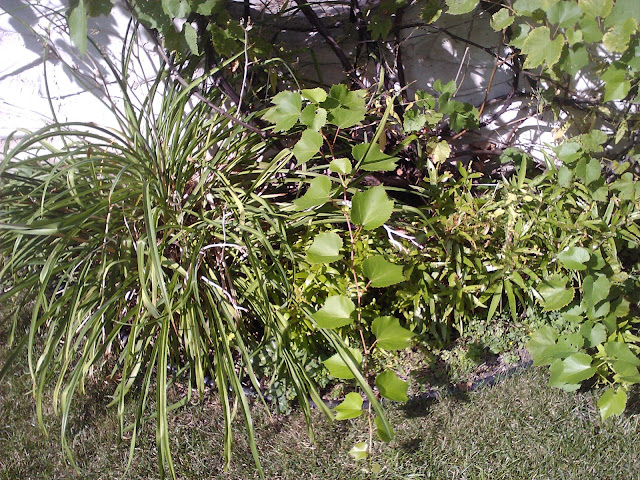 This south facing bed has daylilies on either end that need to be divided and Asiatic lilies in between.
Who knows what else I will find next spring and summer? 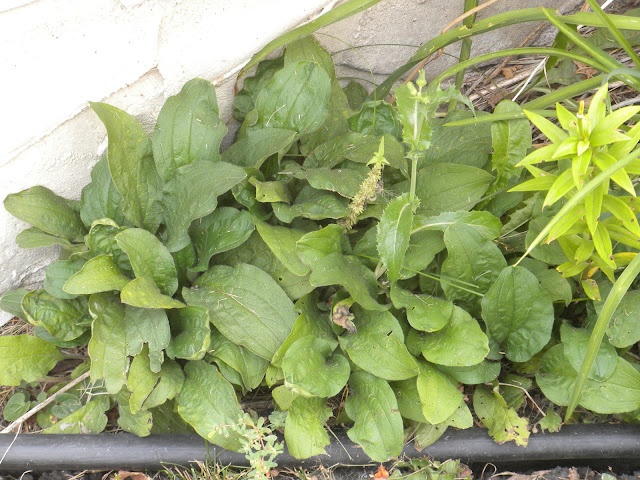 Also whatever this low growing plant is.
{later removed as a weed} 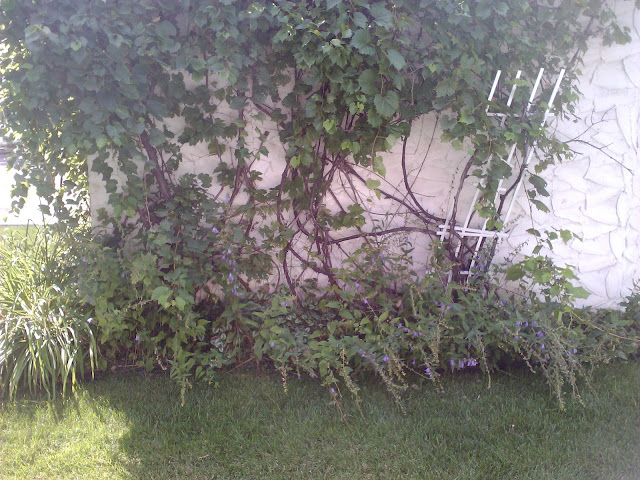 In the east-facing bed I do not see much other than some Lamium, the vine and the tall wispy blue-bell-like plant that I consider a weed. Do you know what it is?
{Jan 10 update: thanks to a reader for identifying Creeping Bellflower for me.  Definitely a weed.} 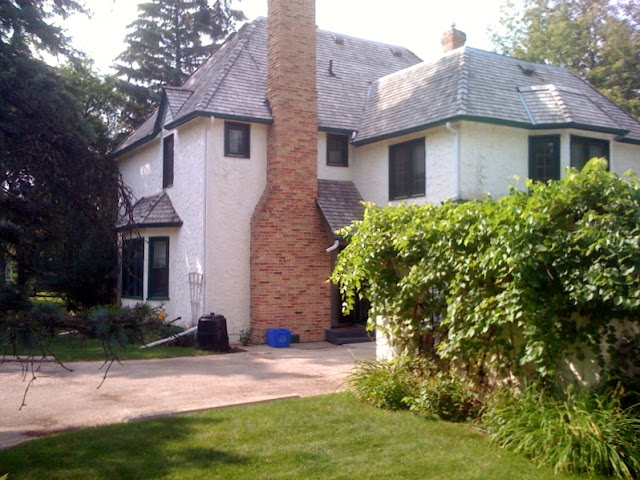 I just love how lush it is with that grape vine. I may add in some morning glories or clematis to keep it blooming longer, though not a big priority to add to it in the grand scheme of things.

Here is an overview of our new front yard in case you missed it.
Posted by astudentgardener at 11:01 No comments:

When we first moved in on October 15th I knew I had little time and big goals...and as the days shortened so did my list, but the days somehow moved faster and with the possibility of snow in November more real than it had been for me in 15 years I let it define my priorities.

What could I not do after the snow fell?

Planting bulbs - once the money is spent on them it is a crying shame to not get them in the ground and I think we can all admit to having made that mistake.

Second on the list was my lasagna gardens - a big undertaking for my first fall - which I finished just in the nick of time.

Then of course there was weeding, the sooner I got rid of those things and their seed pods, the better.

Somewhere down the list was pruning the dead branches off the large fir trees, particularly the one on the street since it is so public.  But one day when there were still bulbs to plant, gardens to build and weeds to pull I got out the ladder and saw, climbed pretty high (but not foolishly high, I hope) and rid the front tree of its lower dead limbs.

While it technically could have waited until after the snow, or even until the spring, they just seemed so obvious. Something I would notice right away elsewhere.  A symbol.

So down they came.

And now when I look out at the beautiful snow covered yard?
I am very glad I made the time.
While having a plan and sticking to it is generally a great idea, sometimes you just have to strike when the spirit moves you.
Posted by astudentgardener at 11:46 4 comments:

One could debate how Christmas trees fit into a gardening and landscaping blog, but heck it is Christmas, and they are trees after all. 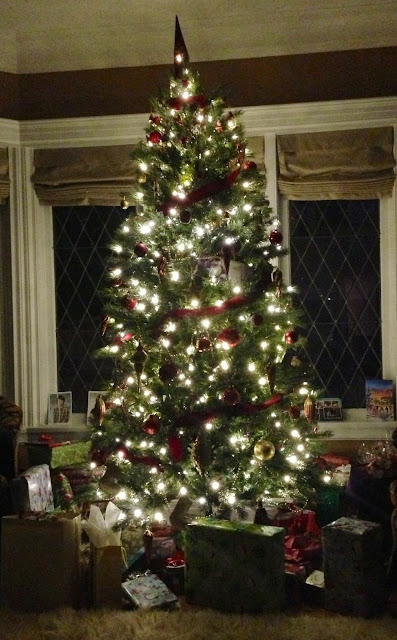 This the our main tree in our living room.  A great looking 7' tall pre-lit in red and gold. 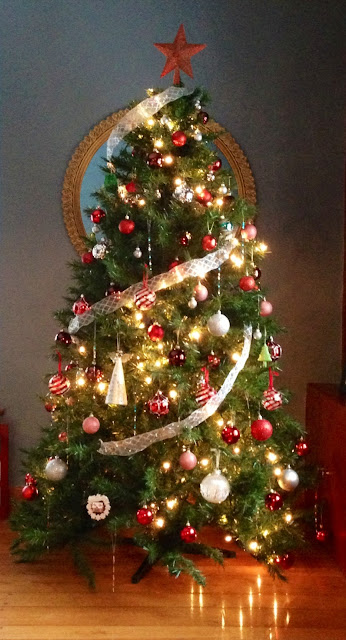 And this is the tree that was our main tree in our last home where it seemed plenty big, but is now our second, smaller tree in the den.
Red and silver colour scheme; I ran out of ribbon half way through, but it will do.

It feels a bit decadent to have two trees, but Winnipeg is such a Christmas-y place that it works well here.

Sharing with A Return to Loveliness

Posted by astudentgardener at 10:13 No comments:

Email ThisBlogThis!Share to TwitterShare to FacebookShare to Pinterest
Labels: Christmas

An important part of landscape design is the lighting, not just in summer but year round.

We are lucky to live in a neighbourhood where people go to great lengths to decorate their trees for the holidays.
I can not take any credit for these lights, completely my husband's doing.  I just added the ice candles up the walkway for entertaining. 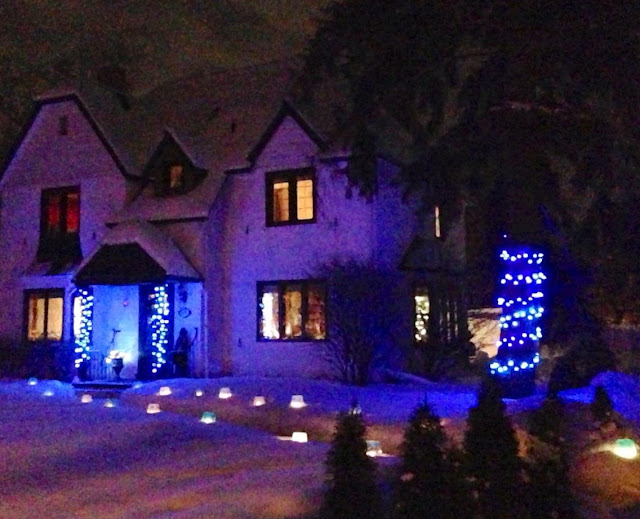 It's a winter wonderland.

Sharing with Christmas Cheer at "the view from right here"
Posted by astudentgardener at 09:42 6 comments:

My new job in Winnipeg is in the heart of downtown not far from city hall where they have these beautiful displays.

Thanks Scott for letting me know those huge plants in the middle are Castor Beans, they were very popular around the city and at the rate they grow in our short season I can see why.
Clearly not a perennial...popular nonetheless. 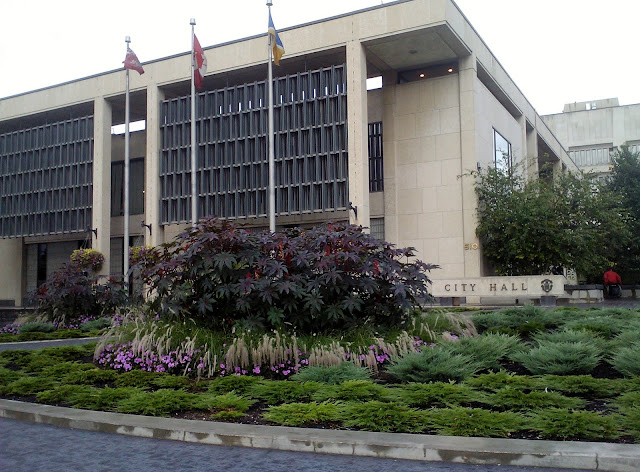 The scale is dramatic and in a city with as long a winter as Winnipeg I think it makes a lot of sense to have those evergreens as a base.  With the variety of shapes and shades it holds enough interest; I remain a  fan of green on green. 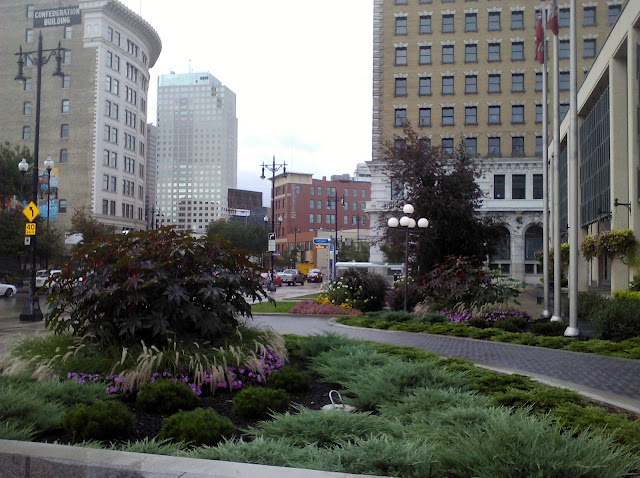 I am not considering the huge plants despite their dramatic scale; I have enough to learn just focused on perennials for now.

I am inspired by the grasses.  I need to incorporate them into my gardens now that I (should) have enough sun.

It will be interesting to see next year if this is city's 'typical' set up or whether landscapers change up what is in the center occasionally.
Or if there are bulbs, as eager for spring as I am.
Posted by astudentgardener at 12:02 2 comments:

One night in the dark I was busy spreading newspapers on top of mulch I had placed on the lawn as I started my lasagna garden when my new neighbour drove up.  Earlier he had seen me collecting the tree leaf debris from the gutter, which I had been gathering for the same purpose.

A friendly fellow, he stopped by to check things out and as I explained what I was doing he referred to my hobby as 'extreme gardening'.  And it was.  And it is.

And I was quite flattered.
Posted by astudentgardener at 11:00 No comments:

Like many of you, I am sure, I cannot help but evaluate landscapes rather than just observe them.  To think of how the park on the corner could be improved, or what I would have done differently at a friend's newly landscaped yard or drawing inspiration from something I judge to be particularly well done.

Often times they are just fleeting thoughts, but there are other times, times where you d not want to forget and this blog is in part to help me remember.

The tennis court below is at a park halfway between my home and my parents.  Public courts, no fee. Not usually that busy and somewhere I hope my husband and I might start playing next year. 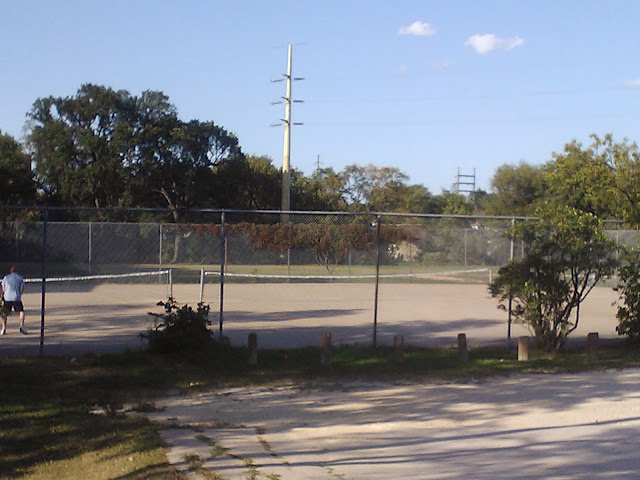 There is a single vine growing up the far side of the fence and I stopped and took this shot because I imagined it with more vines.
Why not?

A highly public place to do a little guerrilla gardening.
I am thinking of morning glories.  They are colourful and easy to grow and should self seed year after year.

I picture a variety of colours, deep purple, white, pink, heavenly blue. As if that will somehow feel more natural than a wall of solid colour.

Posted by astudentgardener at 22:12 7 comments: 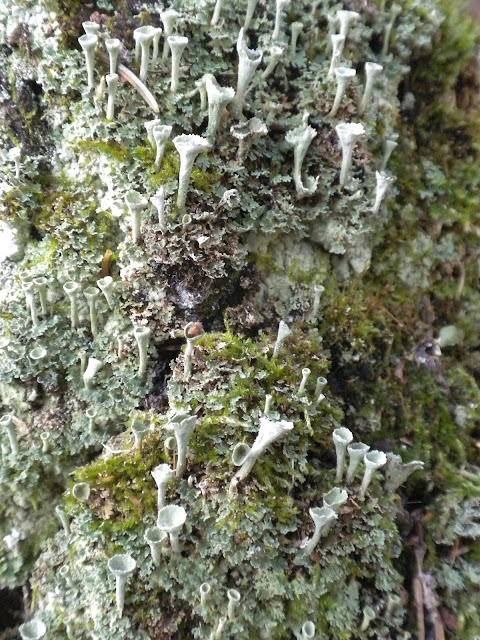 I absolutely love old moss covered stumps and transplanted many from the forest onto my property this fall.

Sharing with Macro Monday
Posted by astudentgardener at 23:02 2 comments:

The other week I did my first tree following to share with treeblogging.com
The photo I shared was taken in the fall after all of the foliage had fallen and I thought the opportunity to see this particular tree with all its bushiness intact and would be past by the time spring comes round given my plans for winter pruning. 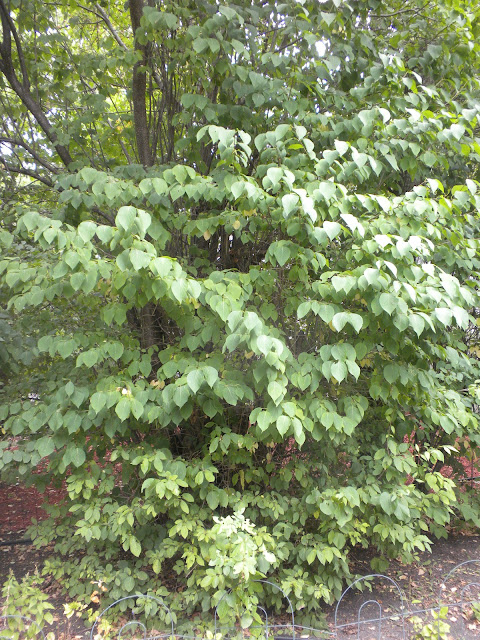 Then I found this pic.
I took it before we actually took possession of our home in the fall but had forgotten to download it - there are more to come! 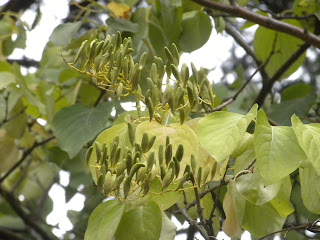 And I found this pic too, which I took to share with more experienced gardeners to help me identify the tree, which I think a friend has done already!

I had dinner guests over and one happens to be a landscape architect.  How he could tell in the darkness that this was a Japanese Lilac Tree is beyond me, but there you go, I think he was right the way he described the horizontal lenticels on the bark (see below) and the seed pods (see above).

I am very happy to have  a lilac tree, and now that I have that in mind, the leaves do look like a lilac even if the shape of the tree did not make me think of the shrubs I am familiar with.

The Japanese Lilac blooms slightly later in June and has a fragrance that I am eager to get to know and which means its placement by the front door should pay sweet dividends. 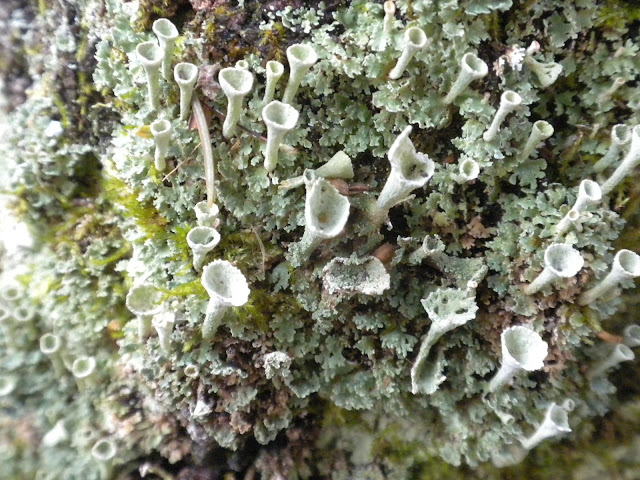 Moss from the cottage garden. A universe unto itself.
***
Sharing with Macro Monday
Posted by astudentgardener at 18:04 2 comments: