When I first planted the Monet Garden I thought there would be more sun than there is. Last year I moved out many of the sun lovers and this year I am finally and fully embracing its shady nature with the introduction of dozens of stately Ostrich Ferns.

There is however an interesting exception.

As apparent as the streak of sunlight cutting across the garden may appear in this photo, it has taken me two seasons to recognize what has been there all along.

Now that I have 'seen the light' (ha ha) and understand where more sun-loving plants can sit in my otherwise shady garden I have a fantastic opportunity to expand my plant selection and introduce something one would not expect to see thriving surrounded by shade plants. 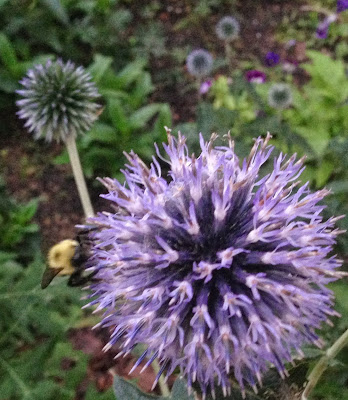 Something like Echinops, which explains how mine have done so well, even though I have resigned myself to the fact that the Monet Garden is generally quite shady.  Five or so have come back from last year and I am direct sowing others, using this 'slice of sunlight' as my map and my inspiration.

This is a wonderful example of the interplay between gardener and environment and how experience with a specific property reveals its idiosyncrasies and opportunities to optimize on a micro-level.

For example, last fall I moved Monarda into two different parts of the Monet Garden in order to see which would do better and I could quickly see that the Monarda in the 'slice of sunlight' was 2-3 times the size of the Monarda in the other part of the garden (which has since been moved into the slice). 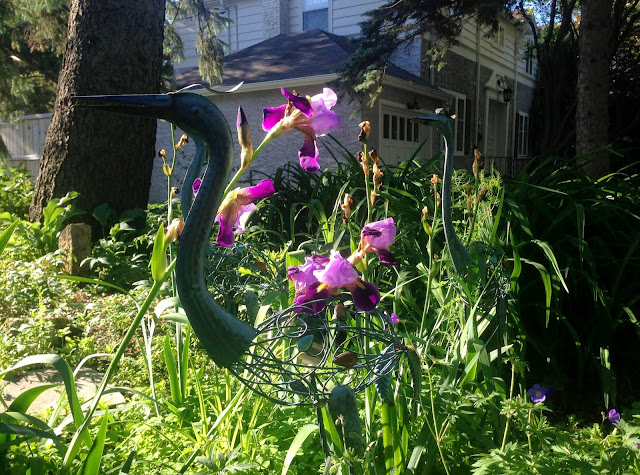 I had been  prepared to be satisfied with just the interesting foliage of these Iris but was pleasantly surprised to see them bloom last year. Now it all makes sense since they are in the 'slice of sunlight' and I will definitely add more now that I understand the reason behind their success.

Despite a mild winter our spring blooming bulbs are still coming up relatively late. These tulips are the first splash of colour in the Sun Garden and it will certainly be into June before we will see blooms from our daffodils.

Posted by astudentgardener at 15:44 4 comments:

CAN YOU SPOT THE DIFFERENCE? - fern edition

Although I have transplanted many ferns onto my cottage property I have focused alongside the path it became apparent to me just last year how much of a need for them there was closer to the lawn, where guests spend most of their time. 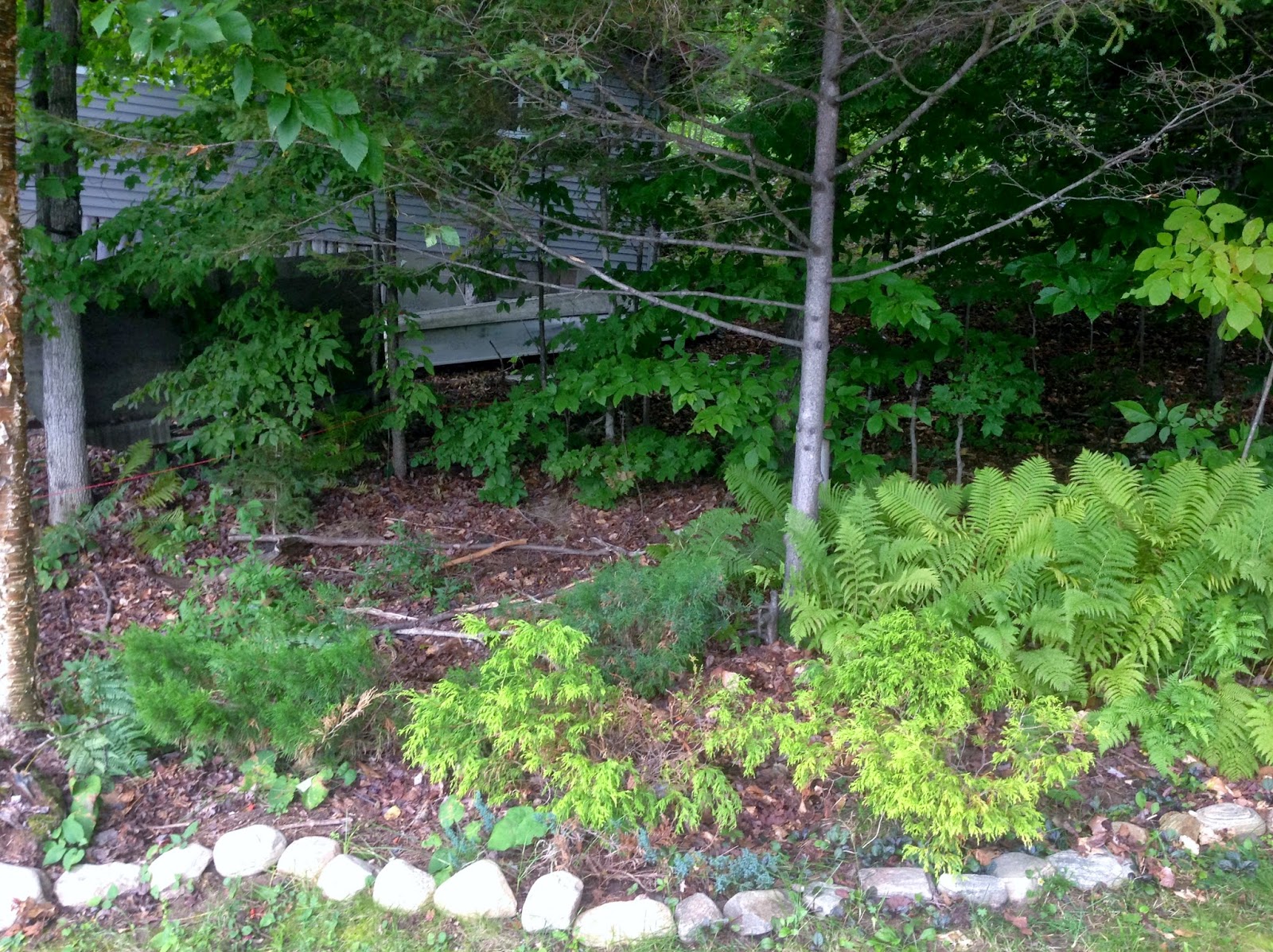 The evergreen shrubs had not taken off like I had planned, so it was time to accept it and move on and infill with native ferns. 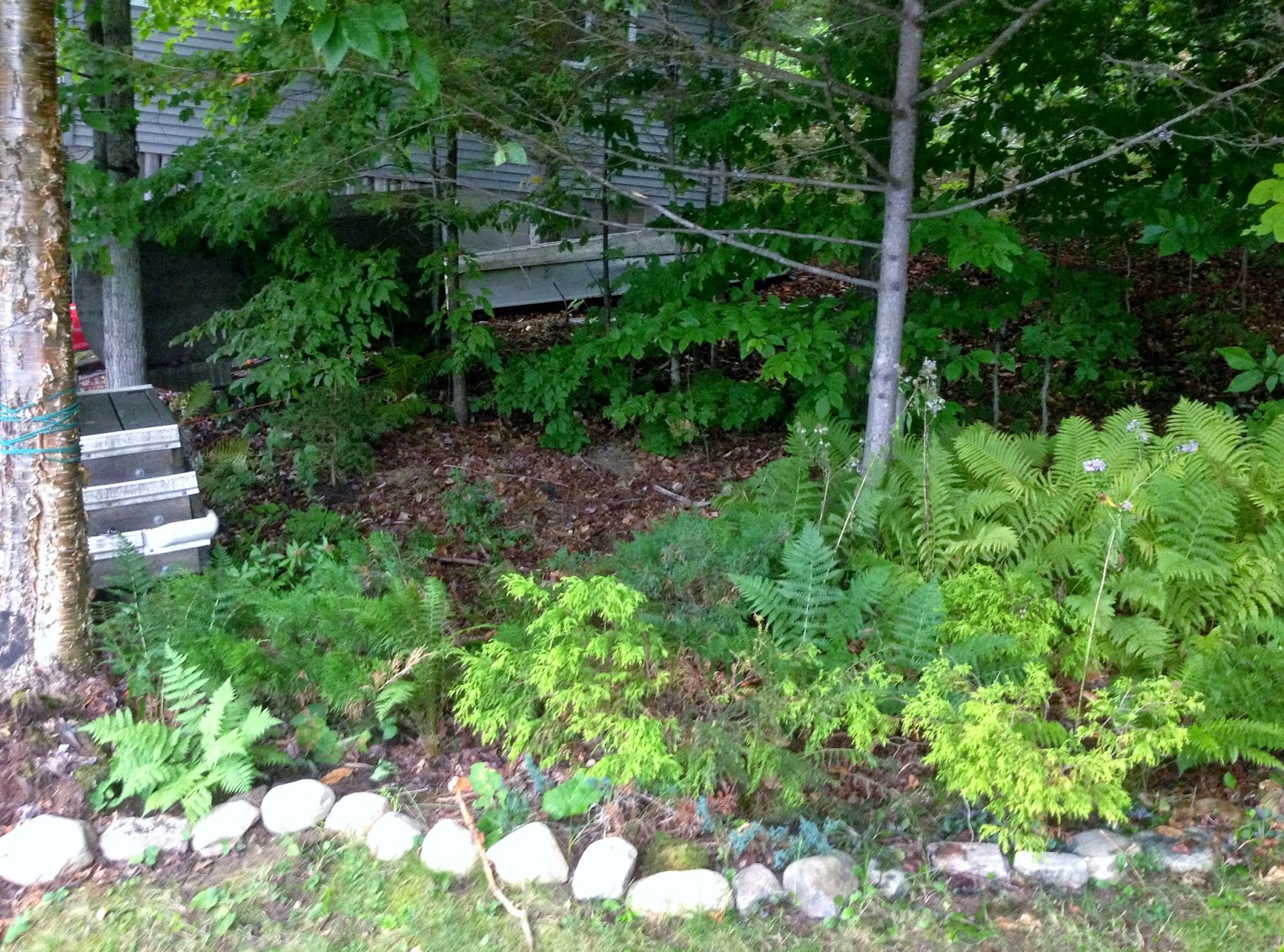 How many of the 10-12 new plants can you spot in this photo? 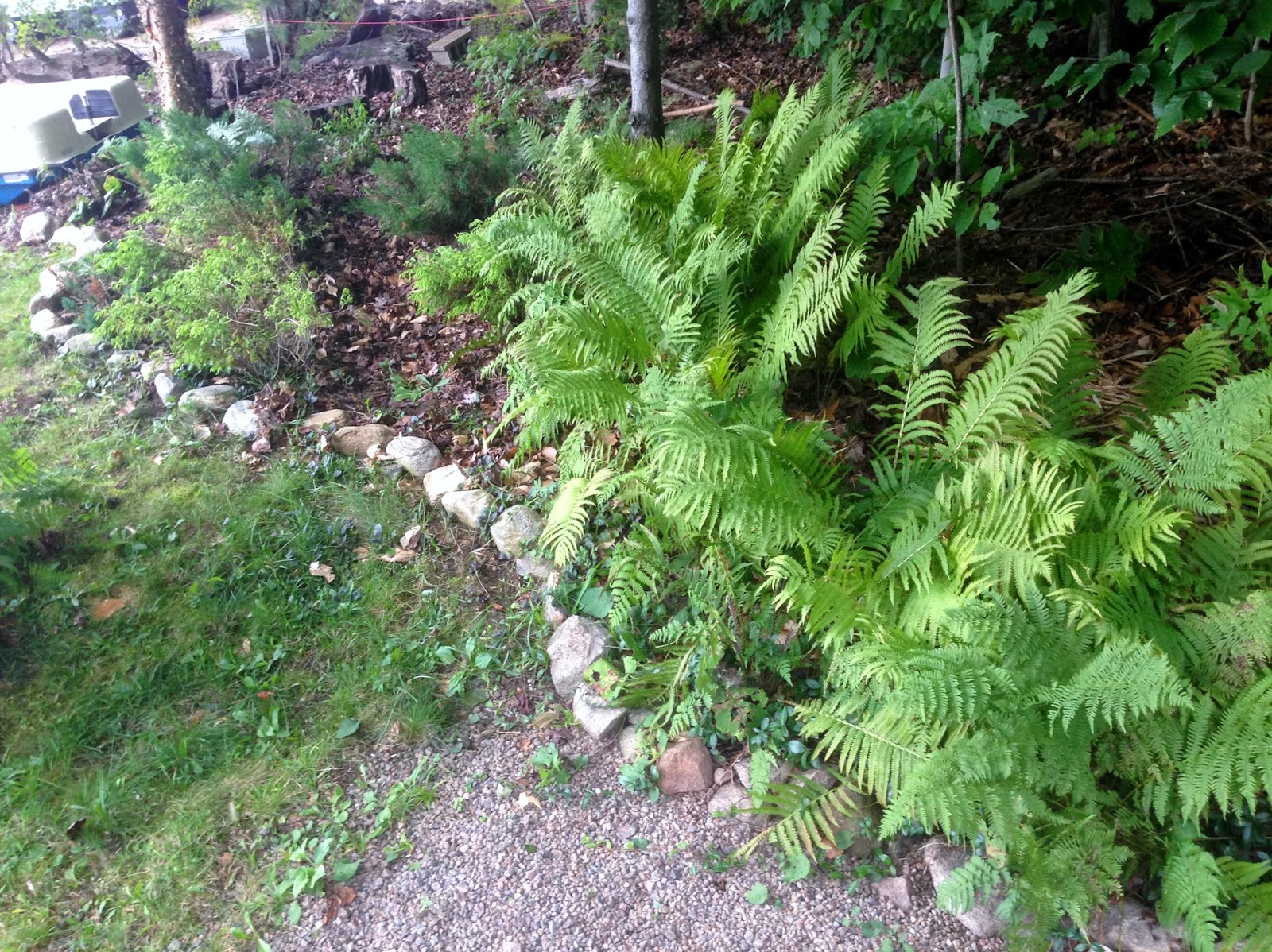 A different perspective helps to shed light on the gaps. 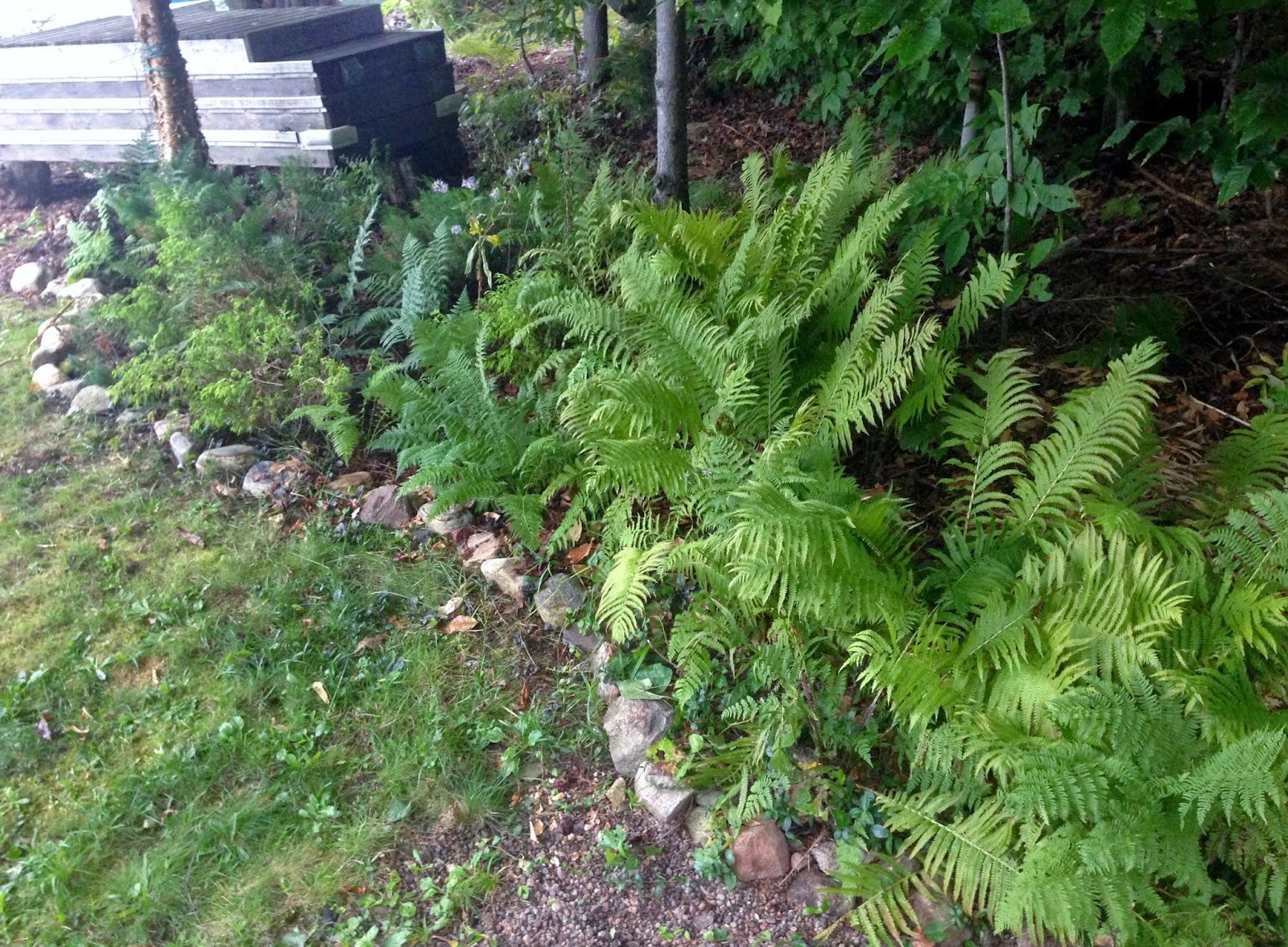 It certainly demonstrates how easy it is for a landscape to gobble up plants by the dozen and still have room for more.

Posted by astudentgardener at 18:50 10 comments: 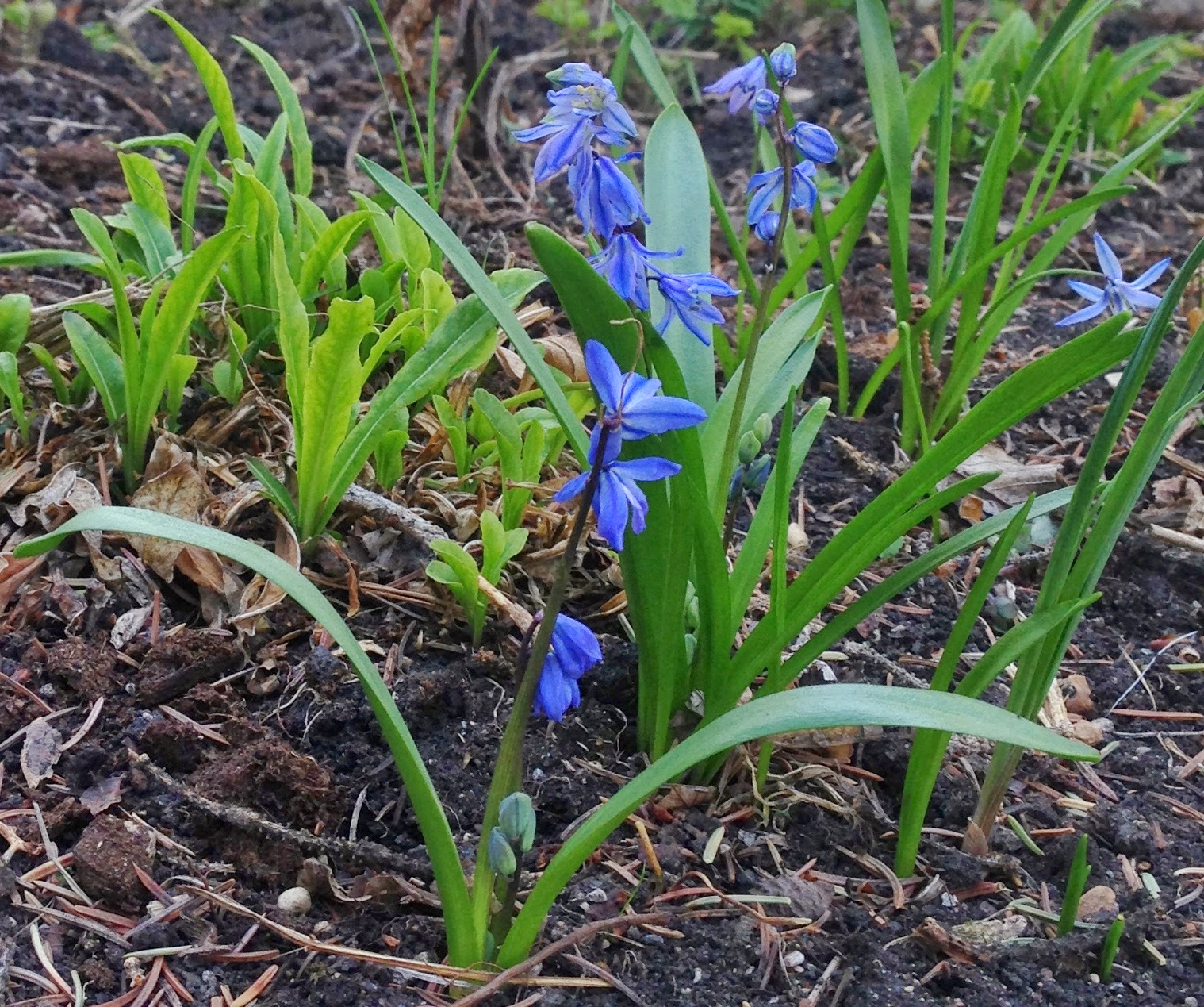 In August of  2013 I first posted that "my ultimate goal is to make it feel as though the driveway cuts right through my garden" which meant converting a significant piece of forest hillside covered in dead leaves and fallen tree branches into a lush green expanse of Lily-of-the-Valley, Periwinkle and natives including Ferns & Columbine. 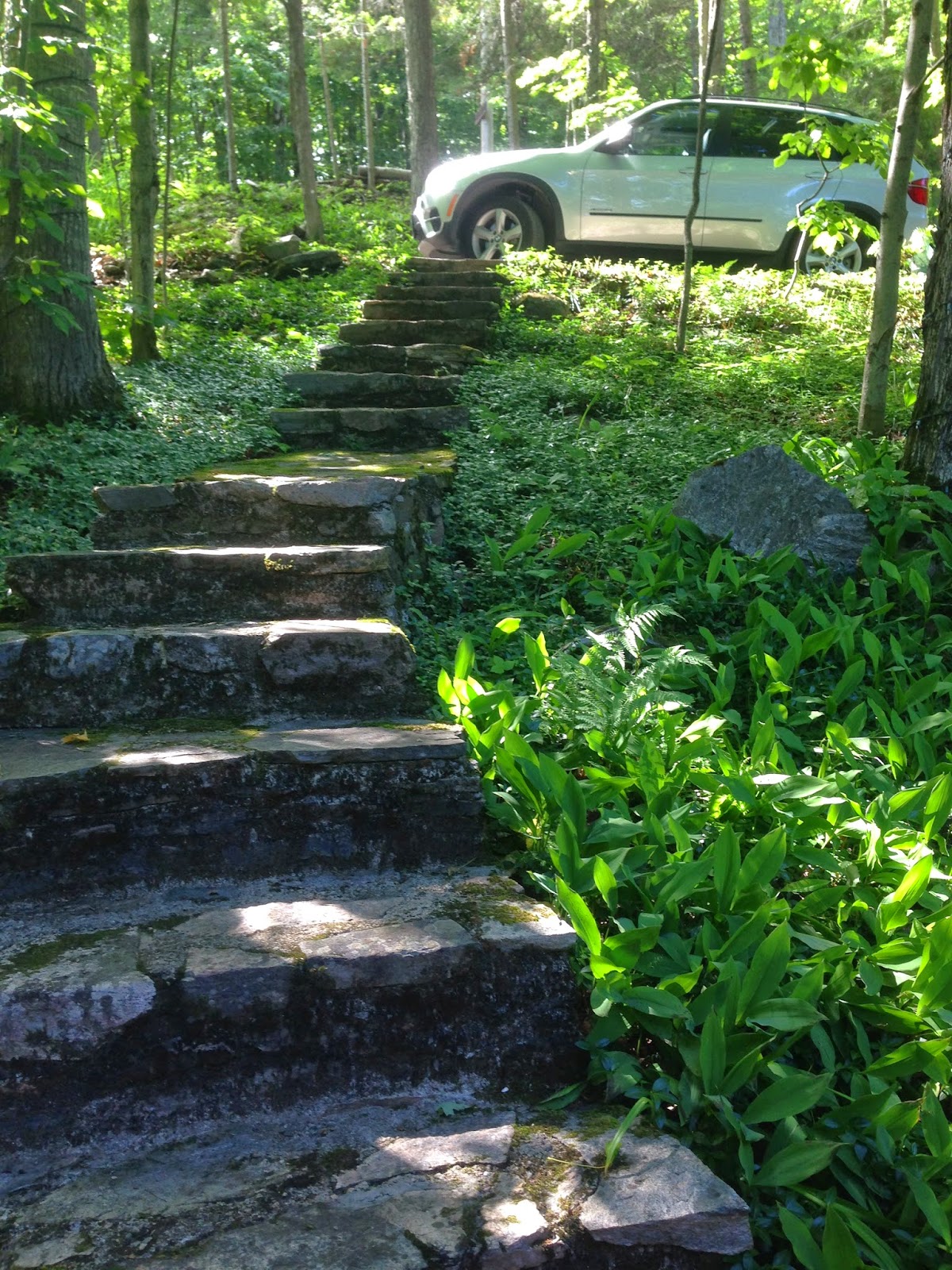 I love our staircase and the thick carpet of green on either side.  Last year for the first time from this perspective the green seamlessly jumped from below to above the driveway (directly in front of the car). 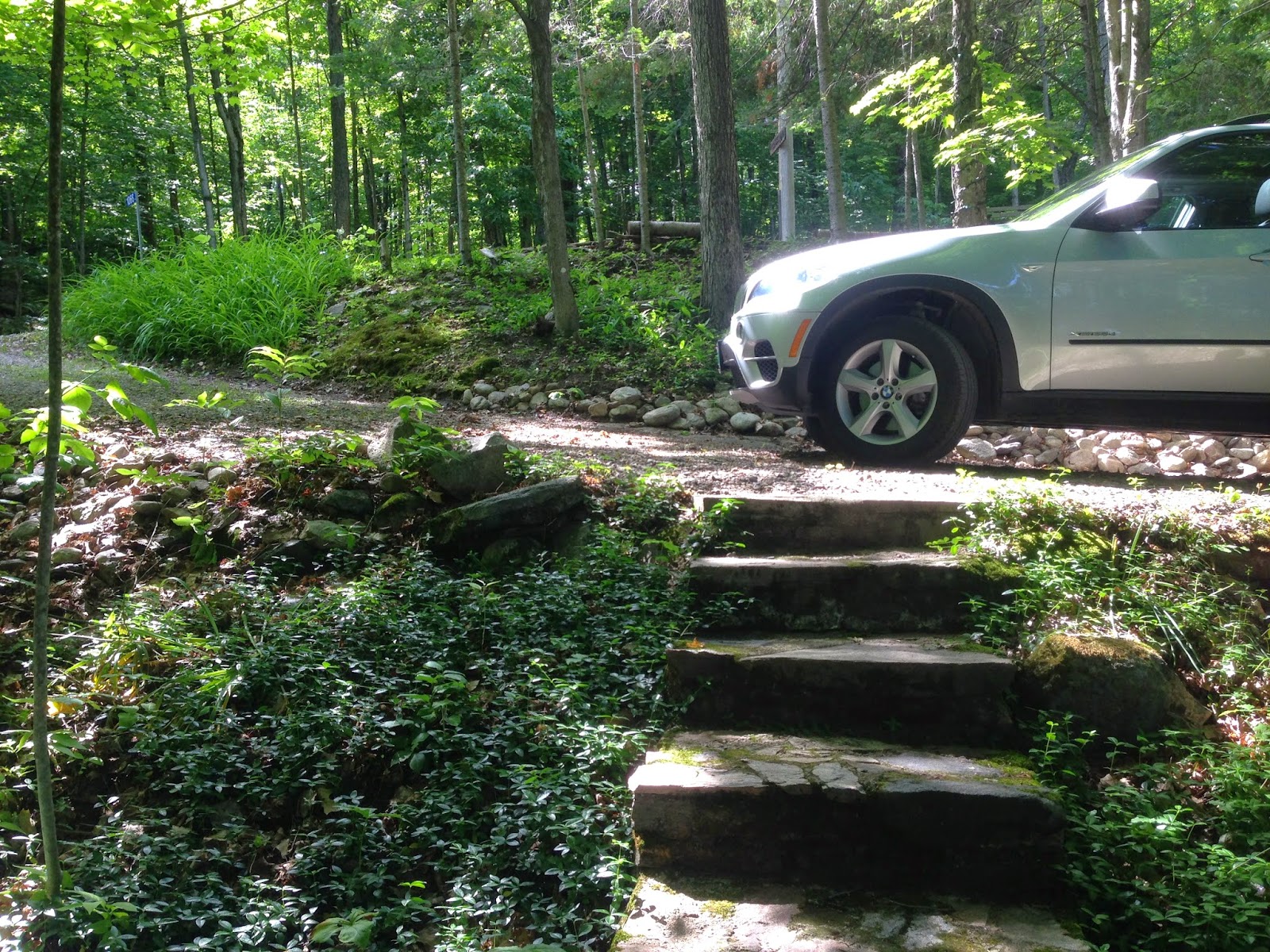 While upon close inspection there are still patches that need to be filled in, the fact that it can make the hillside appear comfortably 'green-from-a-distance' is a major milestone. 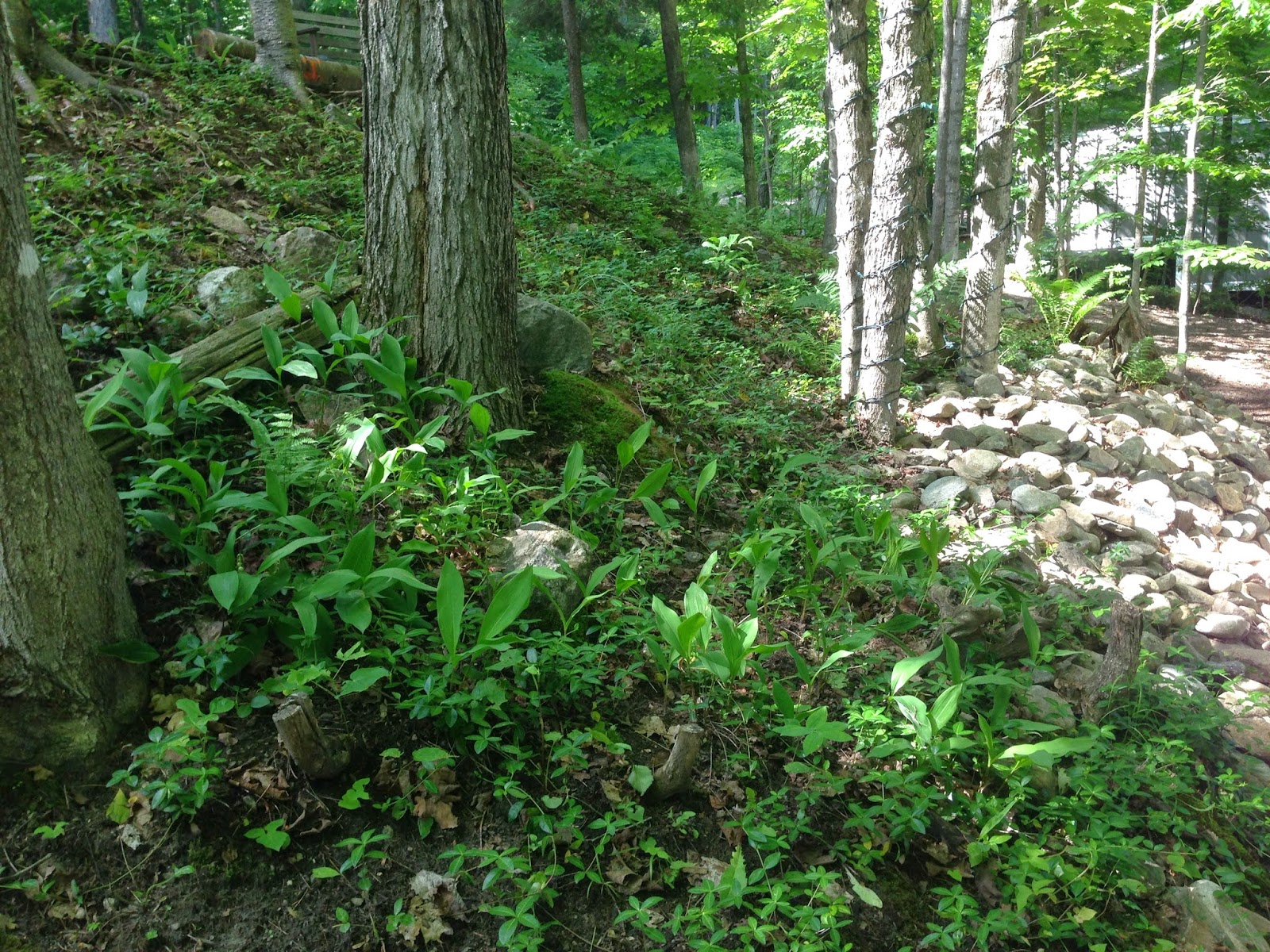 Thousands of individually transplanted plants are transforming the space.
Quite a dry hillside initially, my hope is that the dense root mat being formed will help to retain more moisture in the soil. 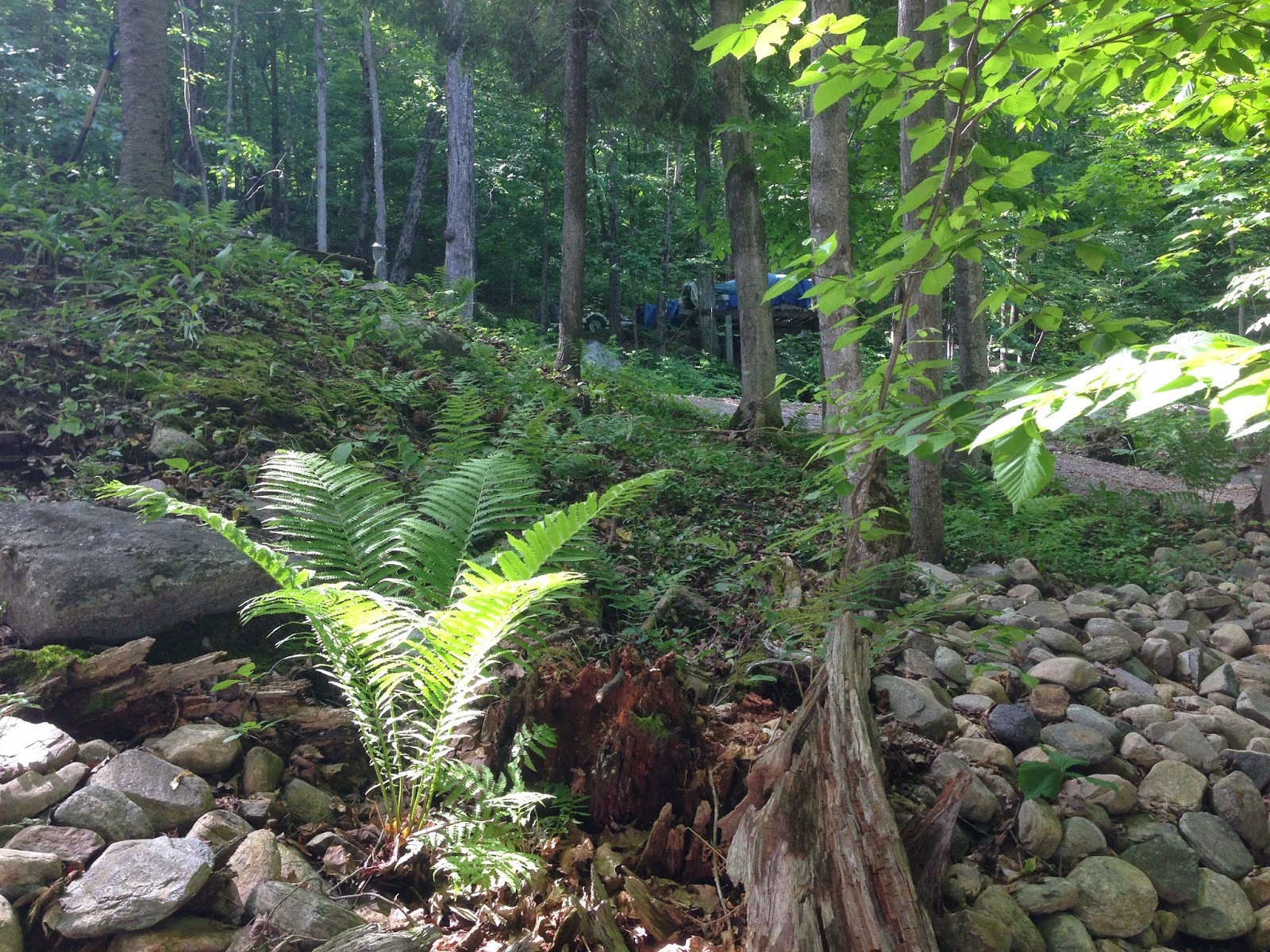 Nature may not always plop a gorgeous Ostrich fern in the middle of a decaying stump, but I do. 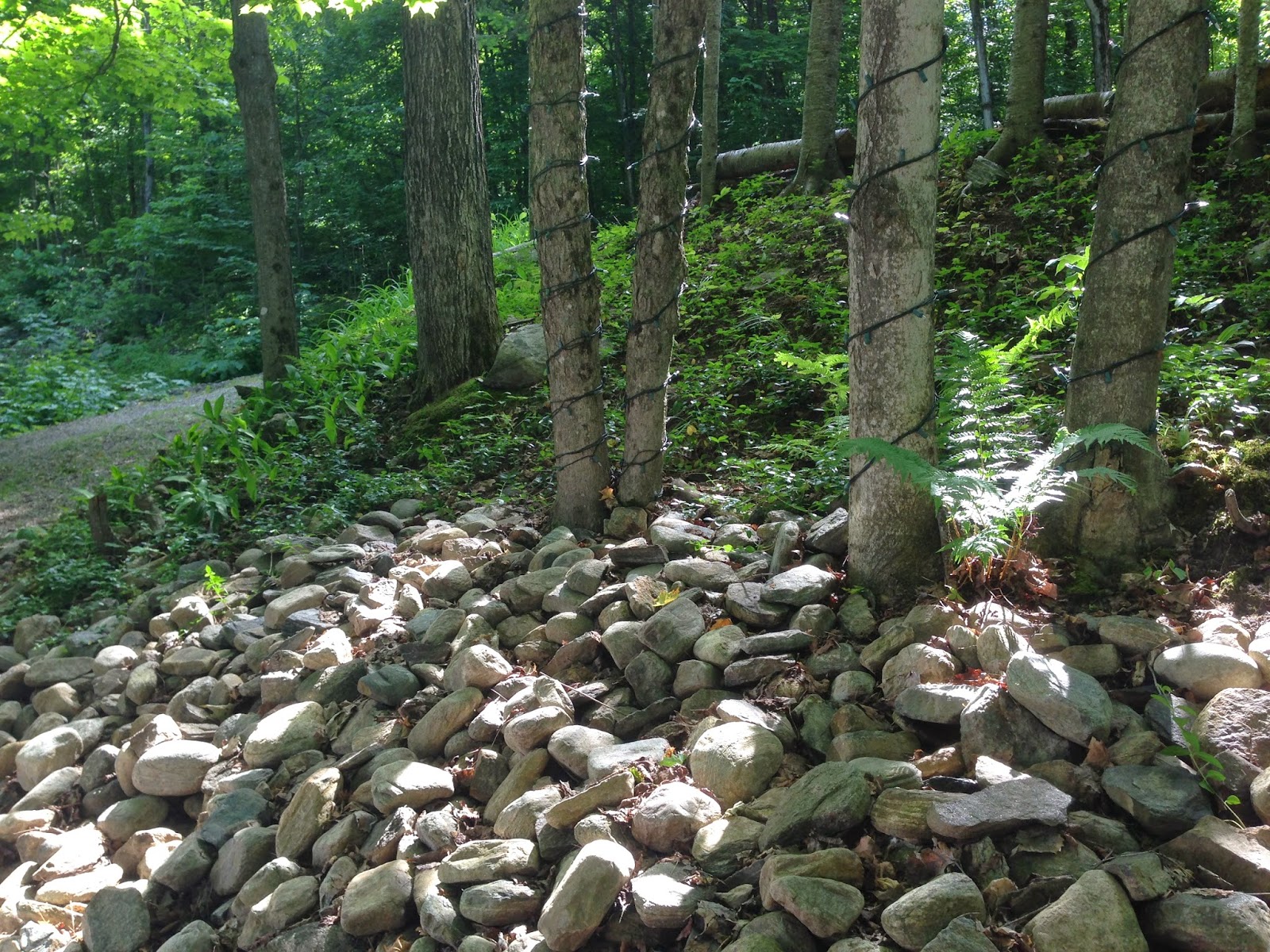 More ferns will be added at the base of trees with lights to take full advantage of their nightly display. 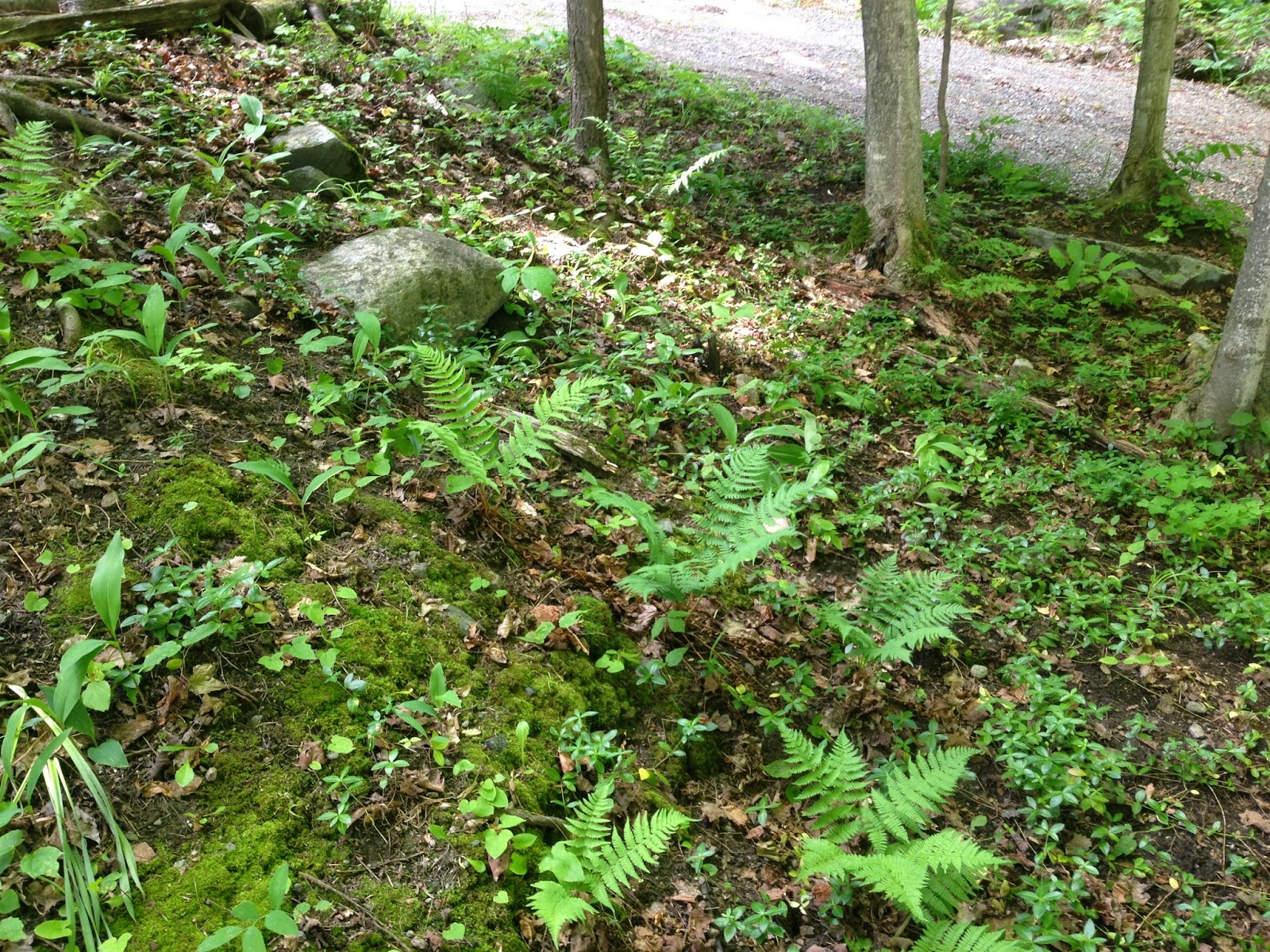 I have learned from Piet Oudolf to move away from the practice of random individual plantings and instead I place the plants in groups to increase their impact, as with these wood ferns in the foreground.

Even if I were never to lift another finger (other than annual raking!), I feel that I have nudged it to a tipping point and it will continue to fill in with little help from me, which is great since most of the summer we have renters at our cottage and I am only there twice a year to maintain the gardens.


Are there any other lovers of woodland landscapes out there?