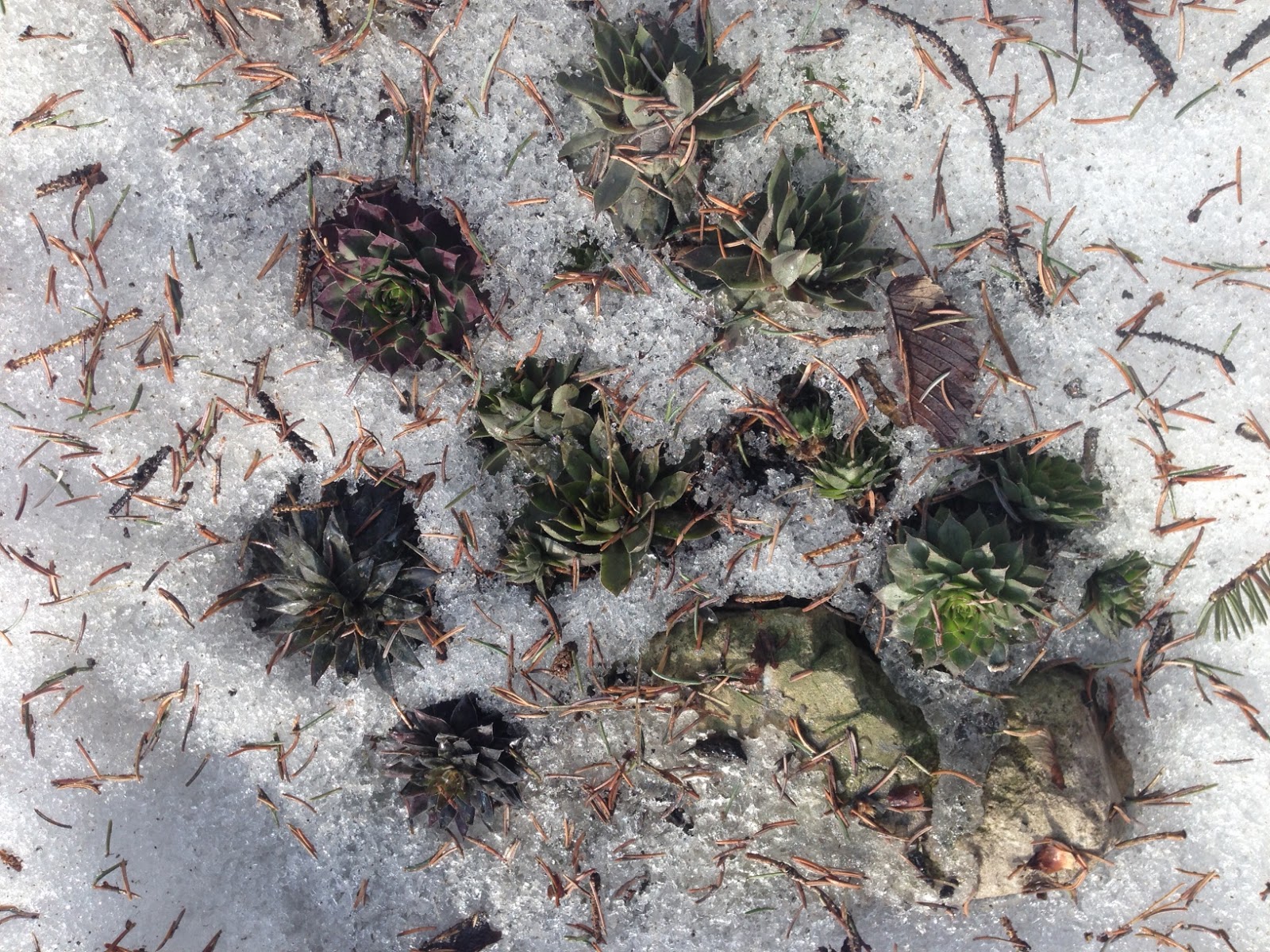 How succulents can survive in zone 3, let alone our coldest winter in living memory amazes me, but there are definitely signs of life (as well as a couple of casualties). 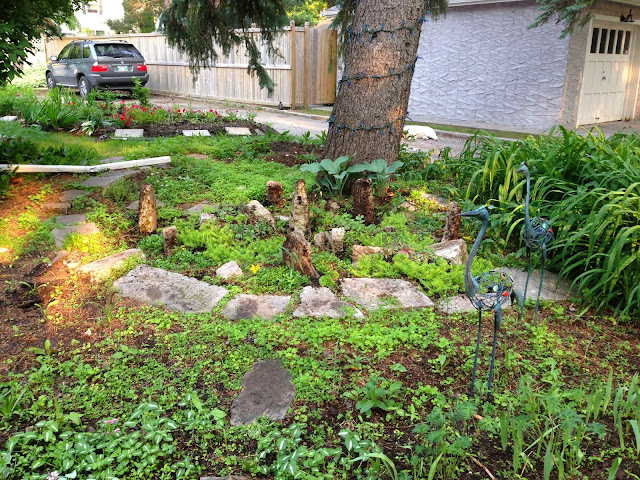 Last May I introduced you to the Alpine Garden, which is made up of flat rocks that must have been the old concrete sidewalk before a new path was put down. You voted to mix Sempervivum and Sedum together, which I tried at first but eventually split apart because the Sedum just covered the poor little Hens 'n Chicks right up. 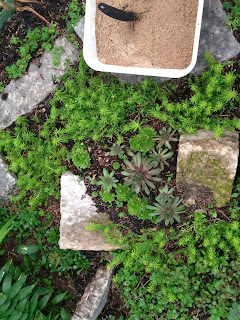 As the season wore on last year however the mounds of earth I had topped with the Hens 'n Chicks shrunk as the earth settled, so in the fall I needed to build them up again. 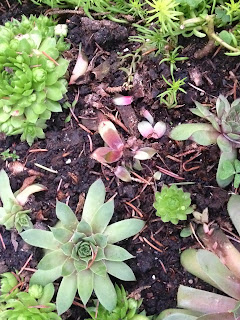 Upon close inspection I could see that some were beginning to rot due to moist conditions since Sempervivum typically prefer dry locations. 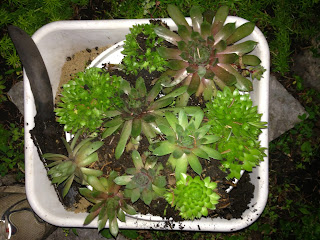 So I dug it all up and put them aside in a container. 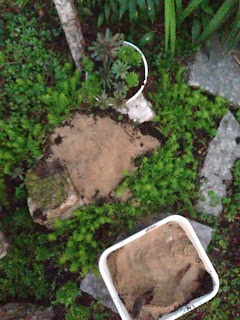 Then I added lots of sand, mixed it up and planted them all back again.
Labour intensive perhaps, but I had not planted them in the right conditions in the first place, so the responsibility was mine to fix it.

It will be very interesting for me to see how well they come back this year and if more sand is needed or if they take off and start spreading under the big Blue Spruce as planned.

Since there are still no blooms of my own here in zone 3 I will finish the series I took at my friend's beautiful gardens last August. 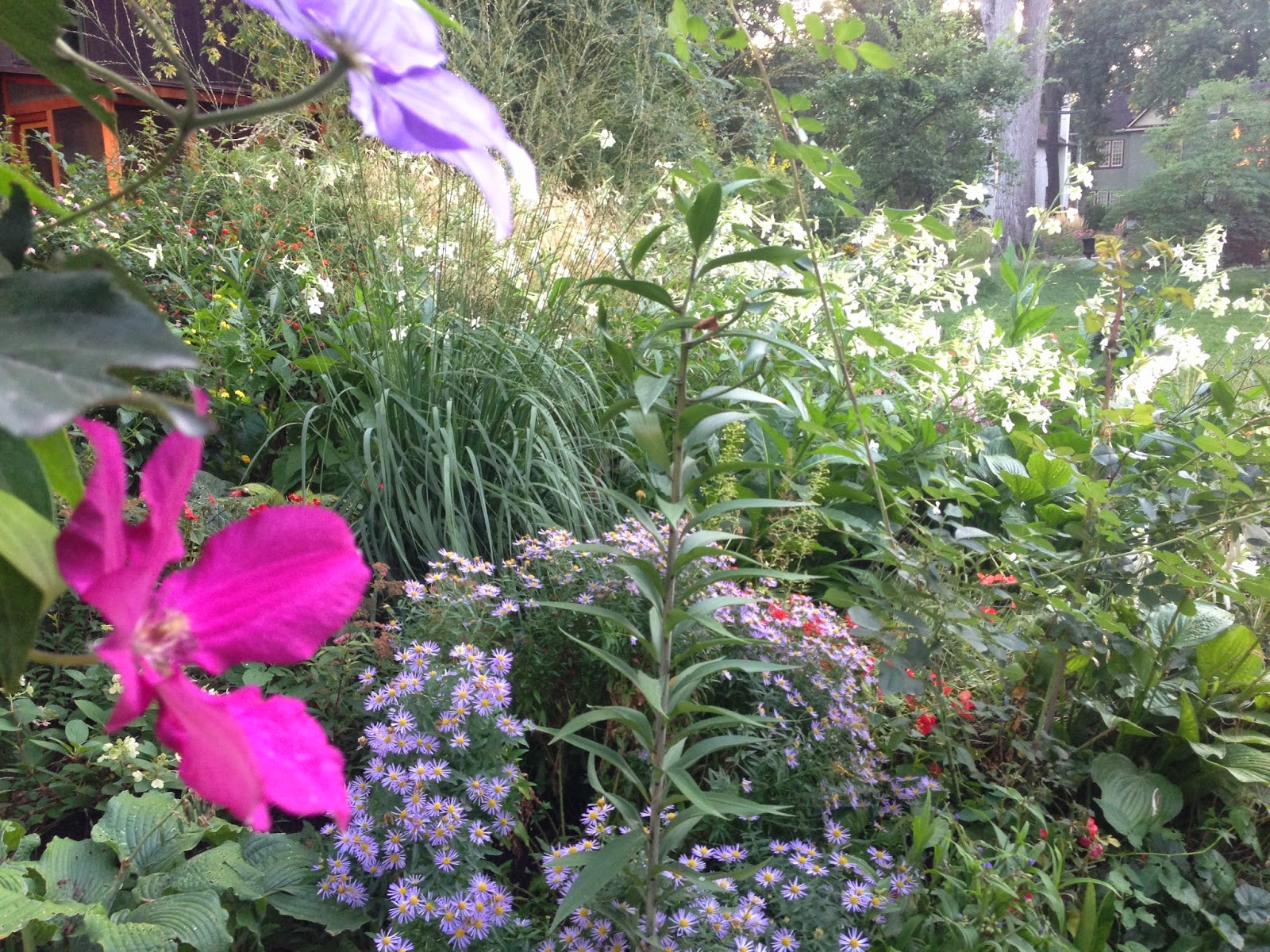 Clematis and pale mauve Asters in the foreground, grasses and Nicotiana in the back. 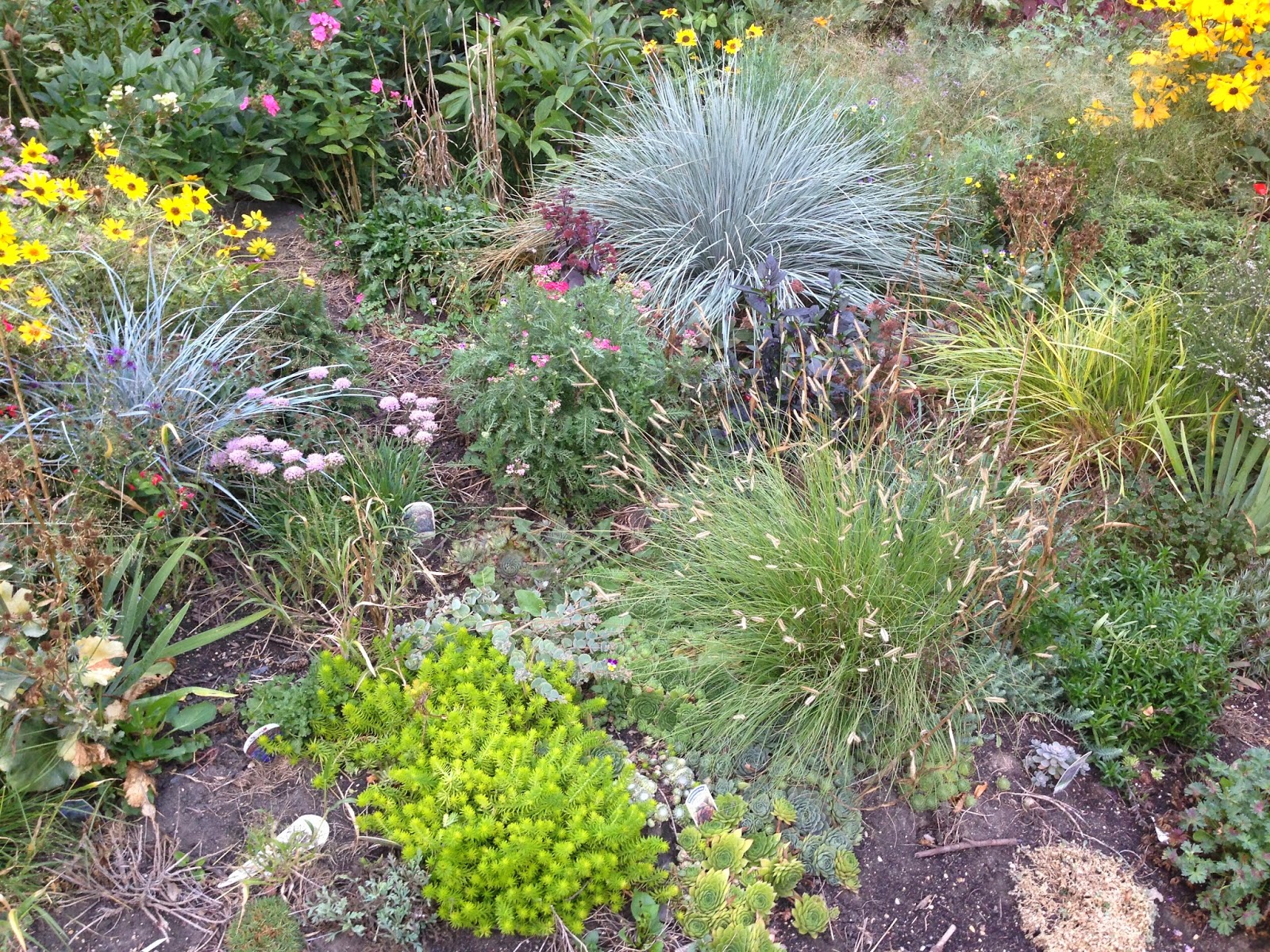 A selection of drought tolerant plants like Sedums, grasses and Rudbeckia. 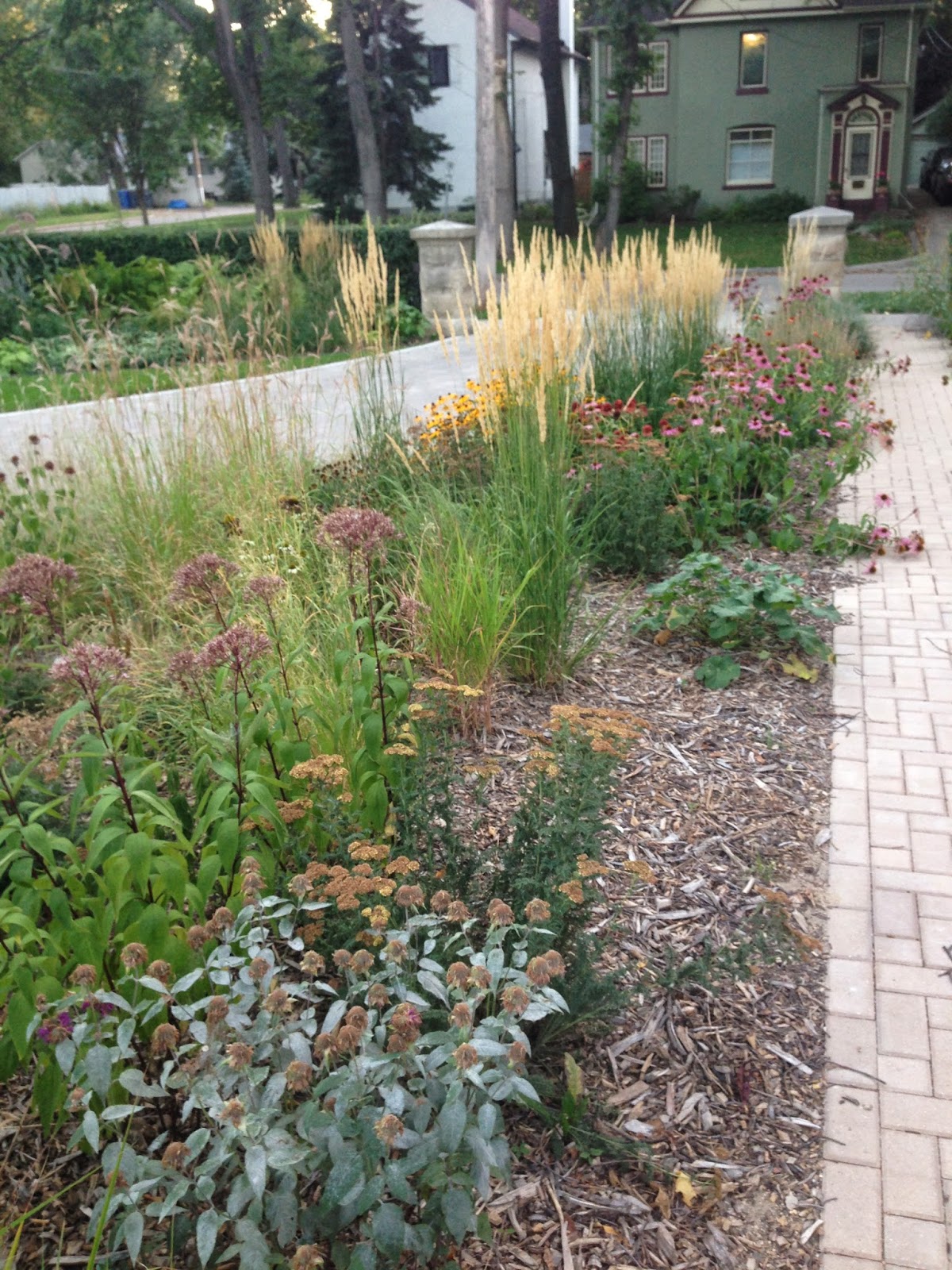 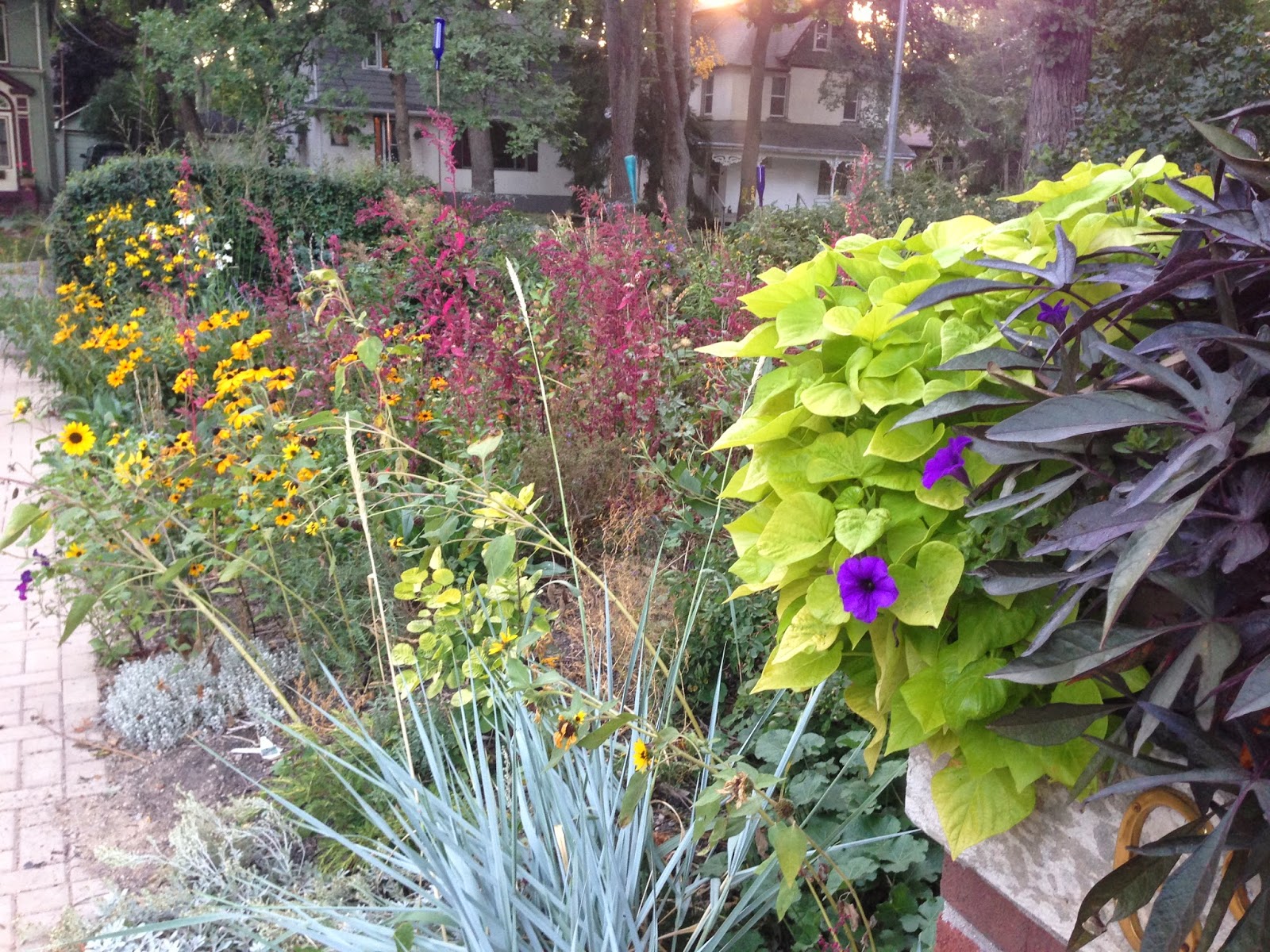 TALLER IN BACK, SHORTER IN FRONT - north deck garden

The North Deck Garden is at our Ontario cottage outside of Toronto (zone 4). Like it sounds, the garden is beneath the deck, so it features shade tolerant ferns as well as daylilies, all harvested from roadside ditches in the area. 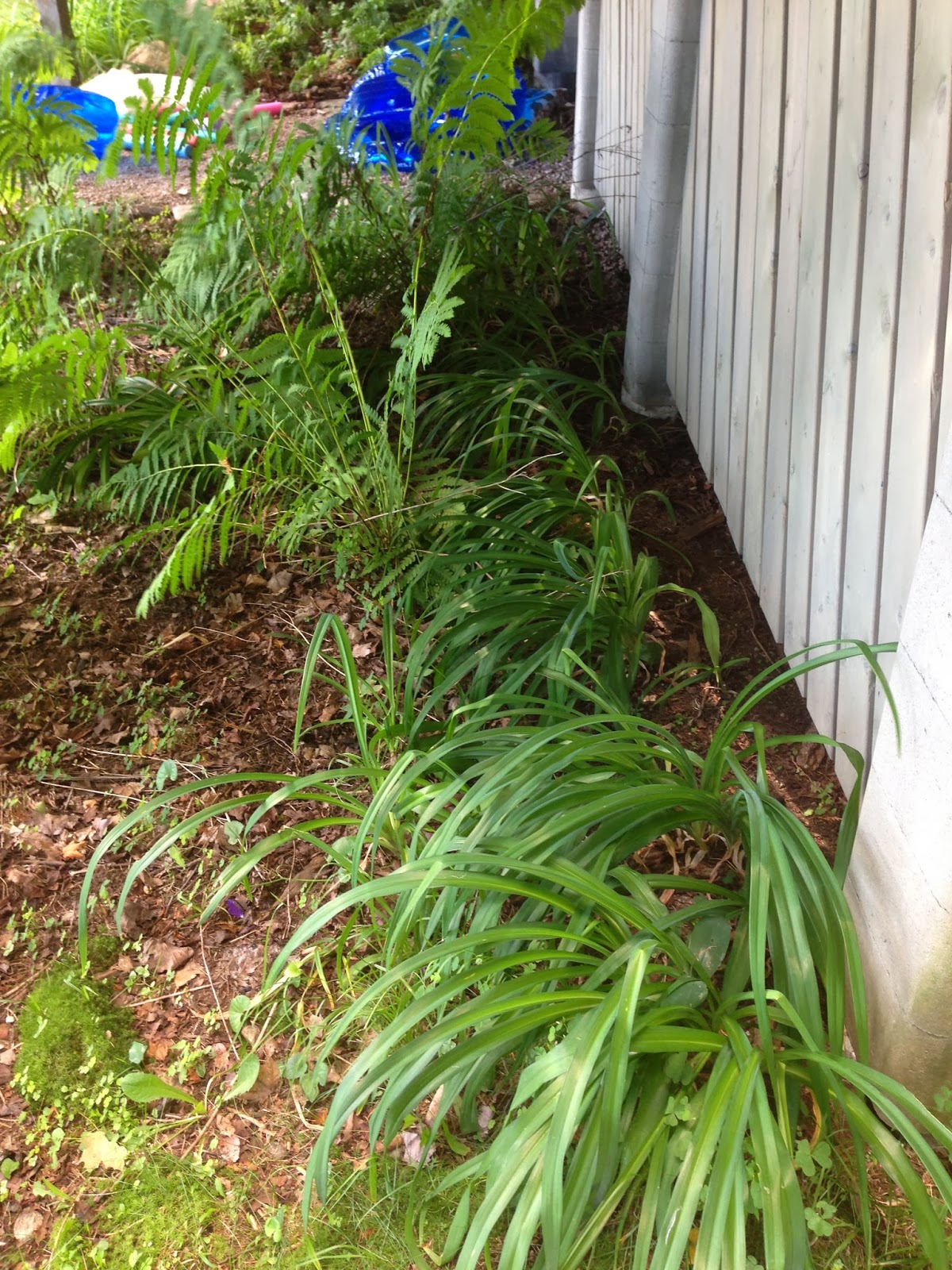 As per previous post, the daylilies had to come out because they were not going to fulfill their purpose of hiding where the fence meets the ground; they grow too much towards the lake and its sunlight. On top of that, the further under the deck they are, the less likely they are to bloom.

So I decided to move them to the front and change the garden from a 'fern patch', with ferns randomly filling the space, to a more traditional design with the big ferns at the back and the shorter daylilies in the front. 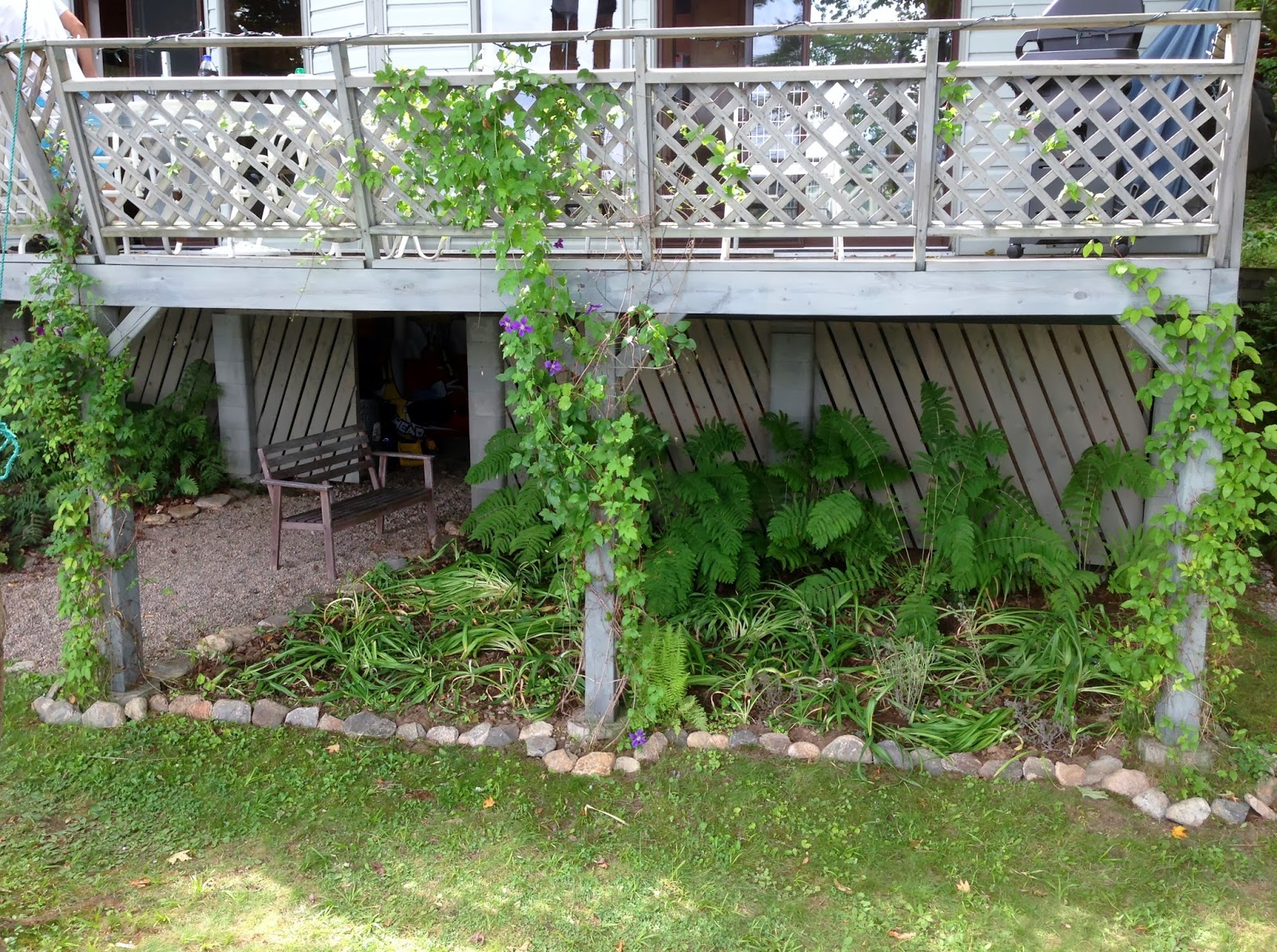 The daylilies are laying down in this photo after transplant but will come up fresh and vigorous next year, hopefully with enough sun to get at least some blooms.
(Just fyi - at the base of every pillar are two Clematis: one white and one purple.) 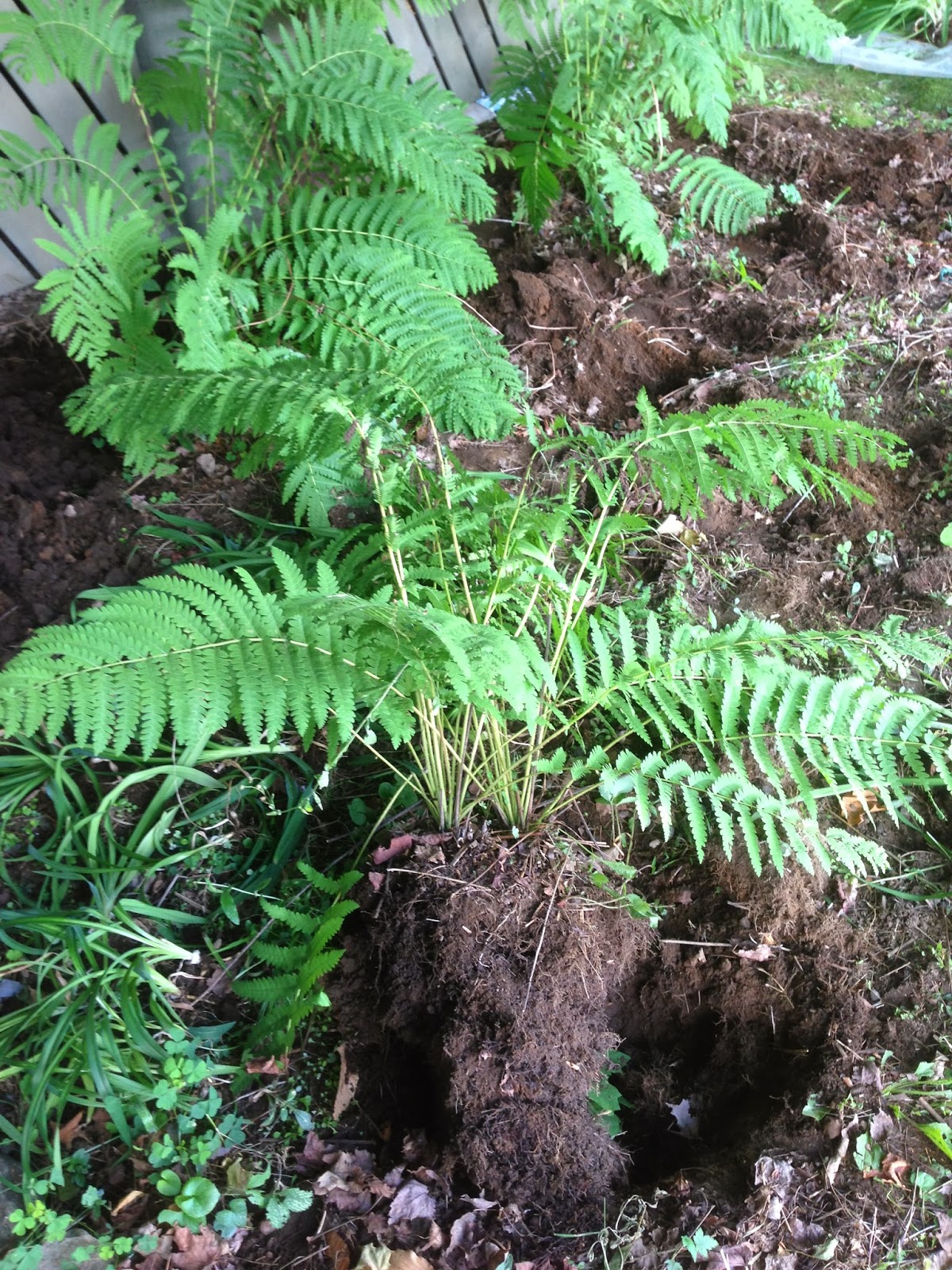 The three of five ferns I had to transplant were all massive and extremely heavy, my guess is fifty pounds. 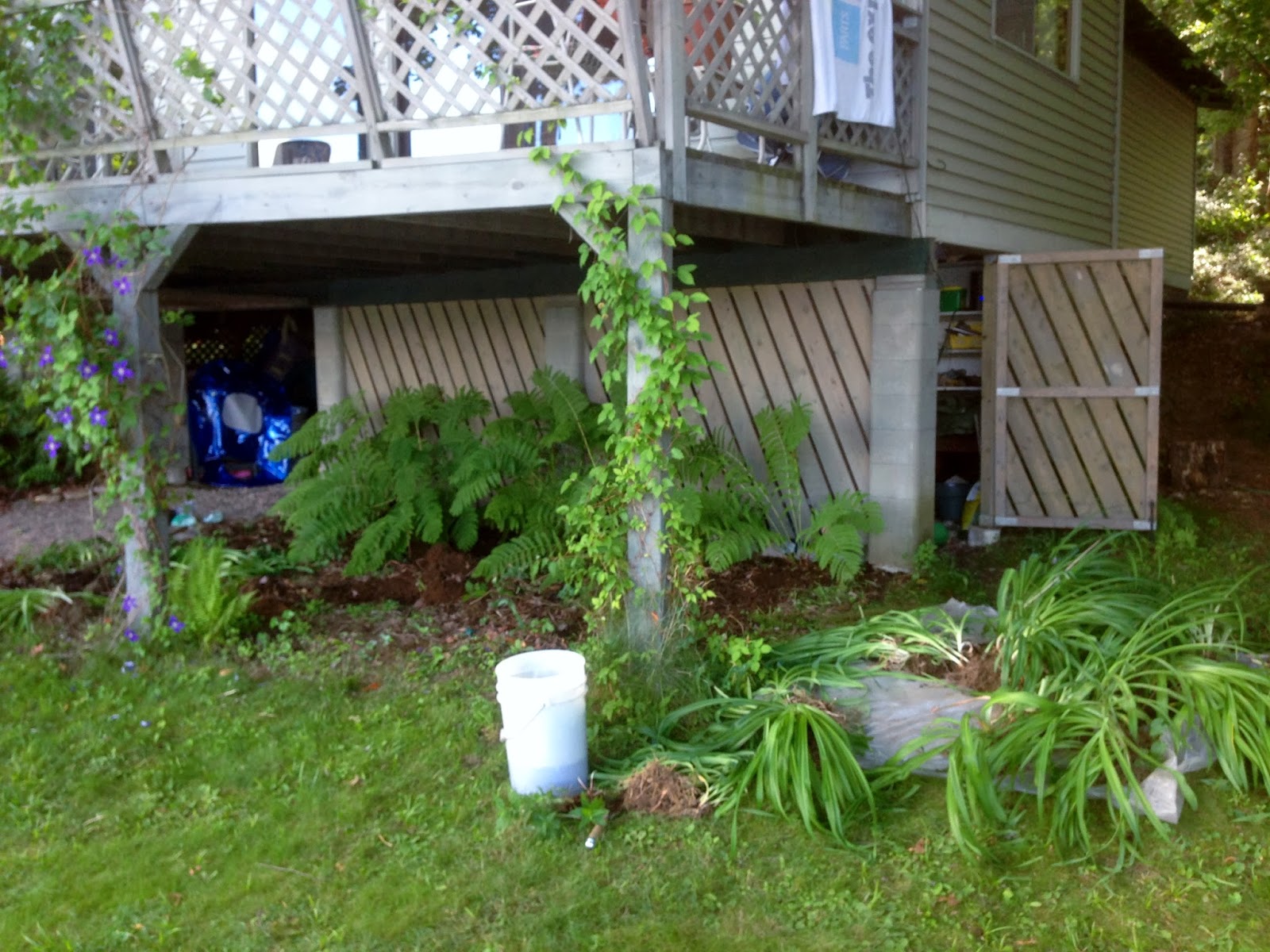 To keep earth from covering the lawn I always place transplants on a nearby tarp. Having them all collected also helps me to get a sense of how much material I have to work with. 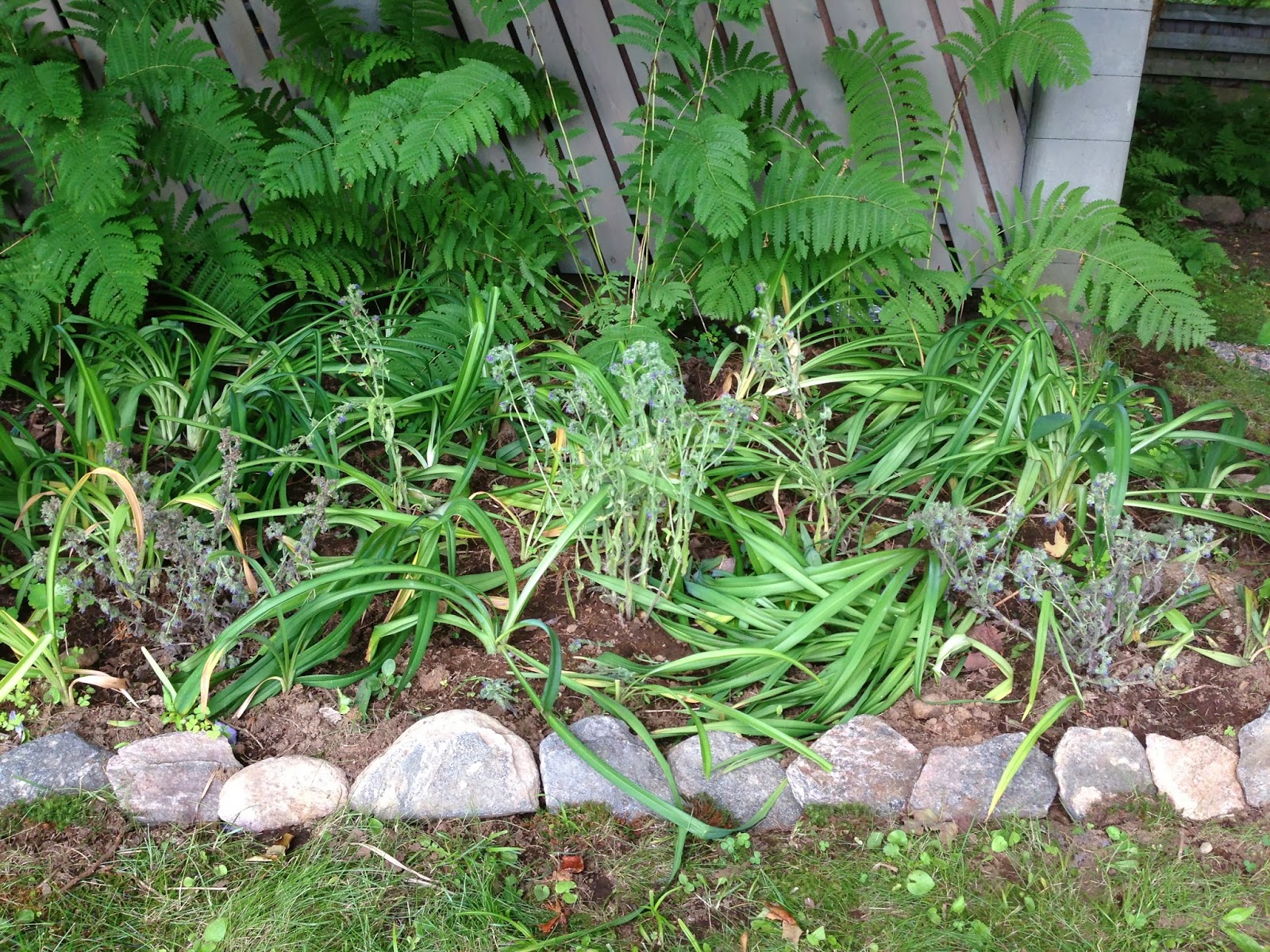 Along with the ferns I added Viper's Bugloss, but I do not expect it to come back, it has such a large tap root it is not a good candidate for transplanting.

I will post some progress photos in early July, by which time I expect it to have filled out quite nicely and a previously muddy patch will have been transformed into lush greenery. 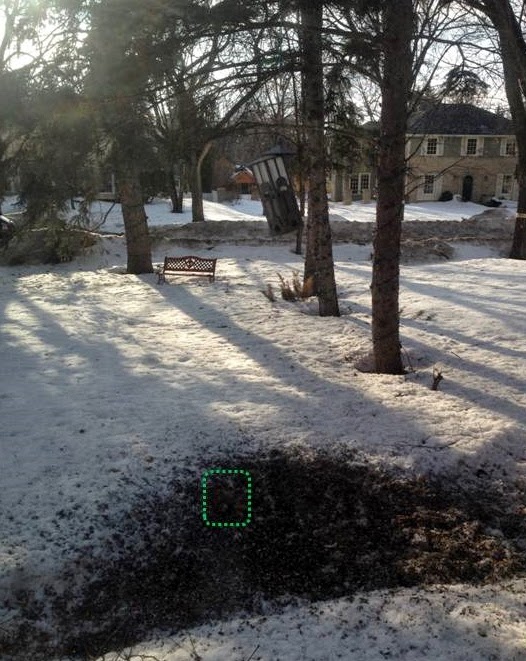 You will have to take my word for it that there is a little red squirrel in that dark patch foraging.  You will notice that above the patch is a bird feeder and therefore that the patch is made uip of a season's worth of sunflower seed shells that keeps growing as the snow melts.

Last year after the thaw there was an enormous amount of grass and unwanted growth beneath the feeder from all of the dropped birdseed.  Subsequently I chose to go with only sunflower seeds this winter because I will not care if sunflowers choose to take root in my garden, yes, even yellow sunflowers in my white Moon Garden will be allowed to stay!

Not that I expect to see many, the sunflowers appear to be an absolute smash hit with all the local critters.

***
Sharing with Nature Notes
Posted by astudentgardener at 10:32 4 comments: 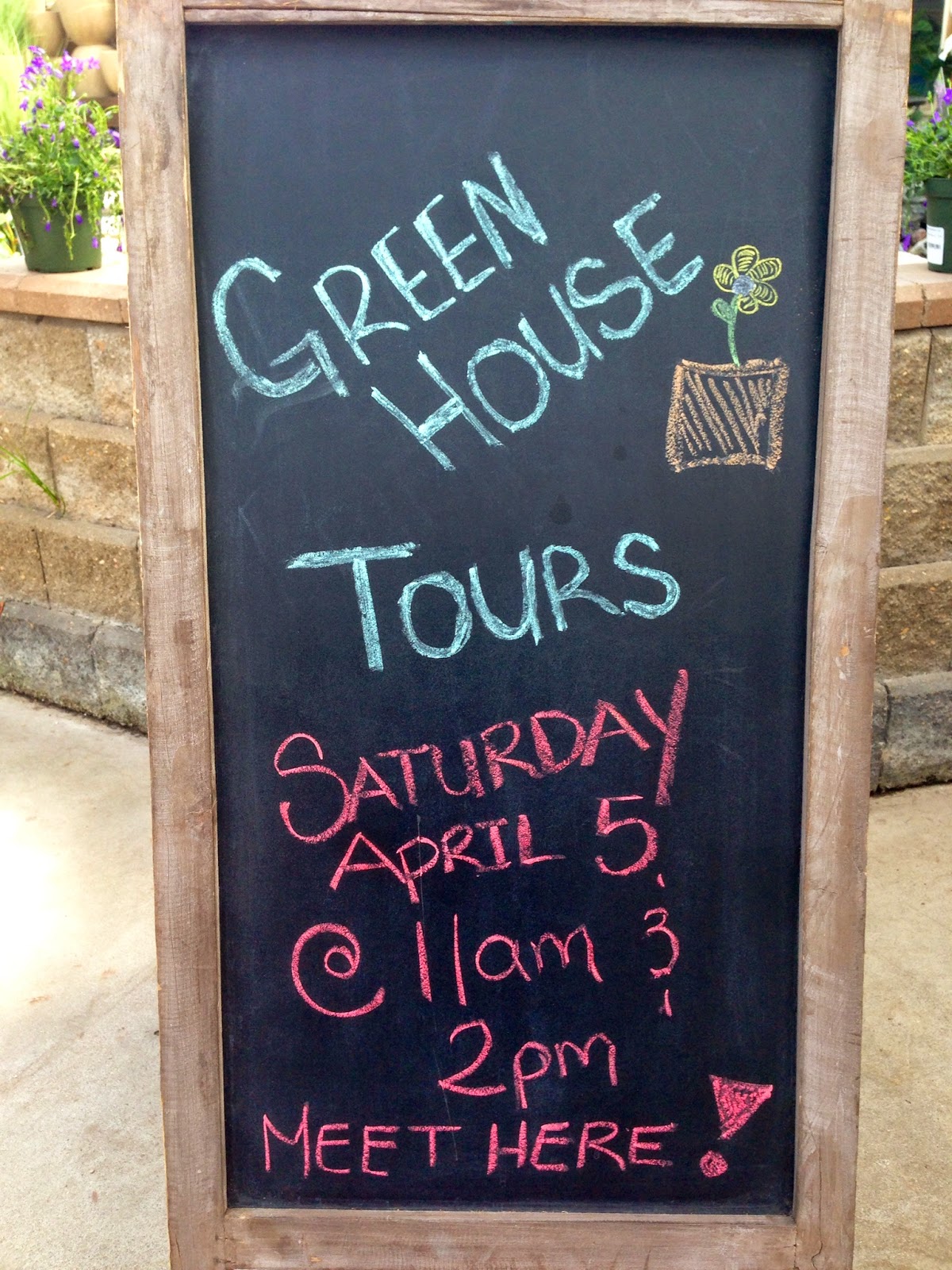 This past Saturday I went for a tour of a greenhouse operations at Shelmerdine, one of Winnipeg's biggest garden centres. 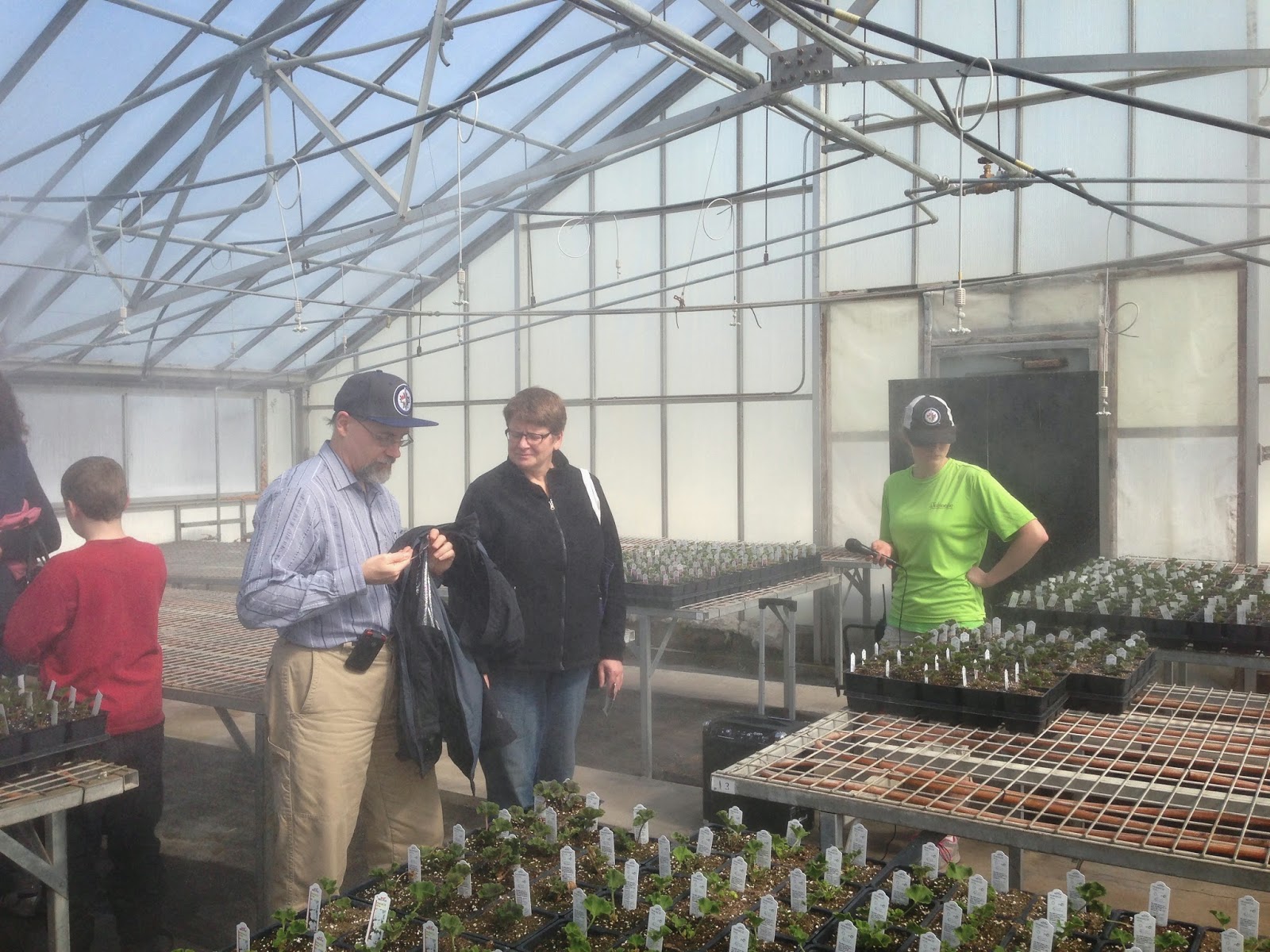 We started in the 'glass house' where it is warm and humid. New cuttings are kept warm from below and are kept most with frequent automated misting. 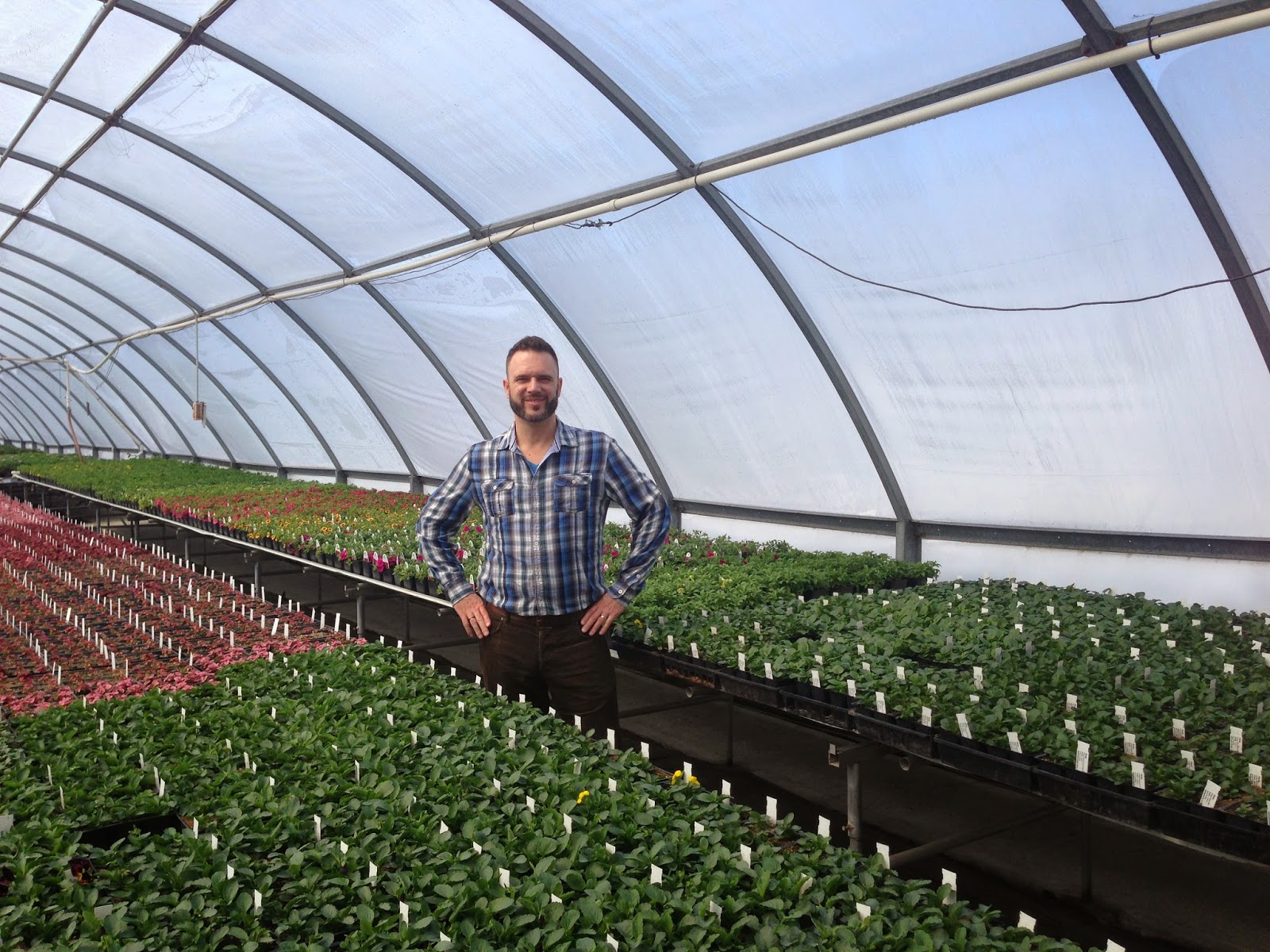 
I also learned some other interesting tidbits:
- warming temps at night can slow growth
- they are not making as many lilies as they used to; thanks the arrival of the lily beetle in the area, people (including myself) are simply not buying as many as they used to
- they work with mostly cuttings vs. seeds to speed up the process and not have to heat the greenhouses throughout the cold Winnipeg winter

If you get a chance I highly recommend such a visit to a local garden centre to see how they are able to have so many  plants ready for all us 'spring-crazy gardeners' come warmer weather.  Plus, seeing all of these plants happily growing in their warm homes was a bit like time traveling 2 months into the future - a taste of what is to come to whet the appetite...
Posted by astudentgardener at 13:03 No comments:

END OF THE MONTH VIEW - march

What do you see? 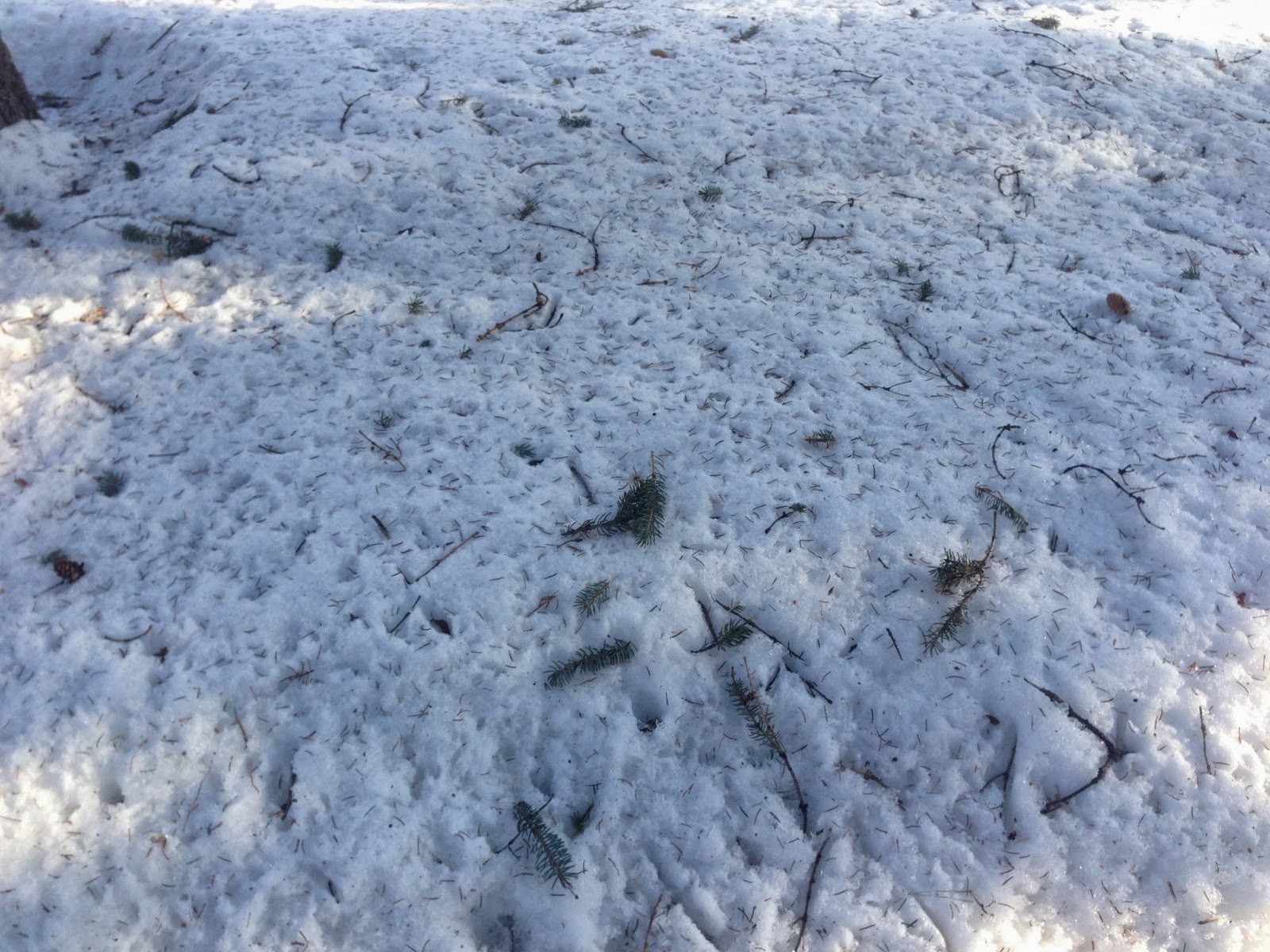 Some would say "dirty snow" but I see the changing seasons.

As the snow melts it uncovers layers of detritus, discarded needles like so many matchsticks spread out beneath the spruce. Which were discarded at the hands of stormy winter weather and which by the slow and inexorable passage of time?
We will never know.

Soon we will have a whole season's worth of 'tree droppings' soggy at our feet.
Hopefully by the end of April I will have switched shovel for rake, but only time will tell...

***
Sharing with End of the Month View & Outdoor Wednesday
Posted by astudentgardener at 11:17 No comments:

Email ThisBlogThis!Share to TwitterShare to FacebookShare to Pinterest
Labels: end of the month view, zone 3

I initially had transplanted Lily-of-the-Valley in the red rectangles under the Spruce on the other side of the path from the Sun Garden. Given it is a big tree, I assumed it would be shady underneath, but the way that the sun comes up keeps it quite well lit and by the end of the summer I had switched to adding sun-loving Heliopsis. 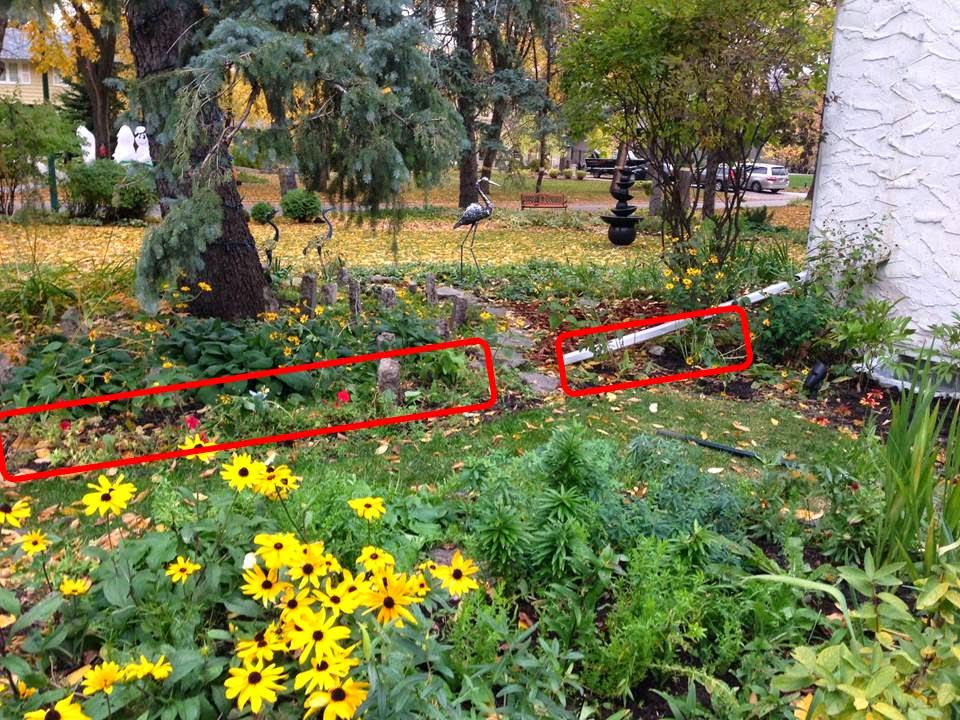 Having taller plants on both sides of the garden should contribute to the feeling that one is cutting through the garden when walking the grass path. The Heliopsis may also keep people in the front yard from seeing too much detail in the Sun Garden; I want people to have to come into the space to really appreciate it.

In those red rectangles I also added 15 orange Hyacinths, as I did at the opposite end under the Cherry tree, to tie it all together.

***
Sharing with Tuesday Garden party &  Garden Tuesday
Posted by astudentgardener at 11:01 No comments: