Time to start talking about the city, after all, I can't spend all of my time at the cottage no matter how much I would like to.  Coming back to the city has some perks and one of them is the warmer climate, from zone 4 to 6 and a chance to grow some different plants. 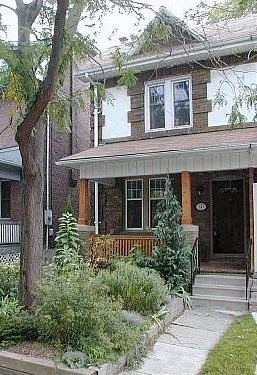 Not a great pic, but the only one I have from before we moved in.  Herbs growing in the front are long gone (though the mint took a few years of persistent pulling).  Despite Cabbagetown's heritage of using front yards for food crops, I just don't trust people to keep their pets out, so flowers it is.

Also removed (and given to a friend) is a Blue Fescue that would really have needed multiples to have impact, and may not have been getting enough sun since it was a haven for slugs in the dead grasses at its base. Good riddance slug hotel.

Back left of the photo you can see a really tall Asiatic lily.  I added more but have lost them all to the red lily beetle.  Right now there is no room there anyway since the Euonymus has grown and I still battle the beetle with my Tiger lilies way at the back past the Hydrangeas.  You can see a few Iris drooping over the side.  I took  my cue from them by divided them, added some others and moving them to the front.
APRIL 2010 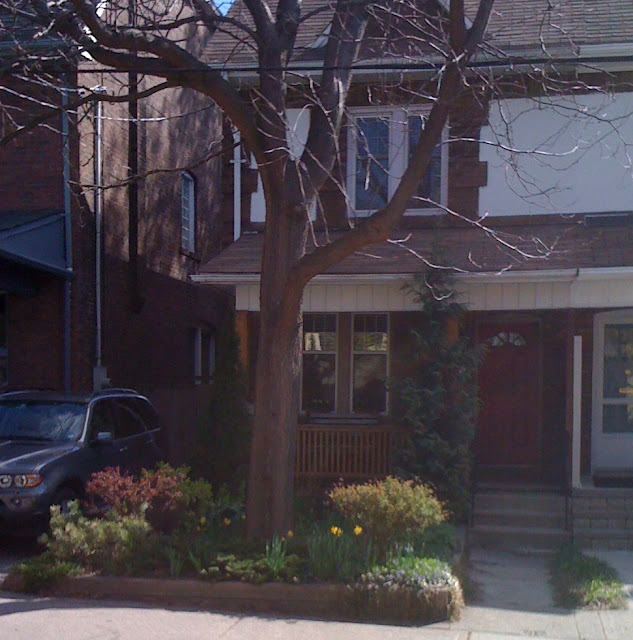 The front garden measures only 15'x10', but let me tell you I'm using every inch of it, and have even expanded to the strip between us and the neighbouring sidewalk.  My neighbours didn't like mowing it and I saw an opportunity for expansion. Though it is small, The Strip will get its own post later since I keep adding new things to it each year.

'Also moved's include a Holly from front to back yard because it was crammed between the Barberry and the Euonymus (I can't believe it ever fit there!) and a Hydrangea from back to front yard to make the appearance of one big Hydrangea between the two evergreens. 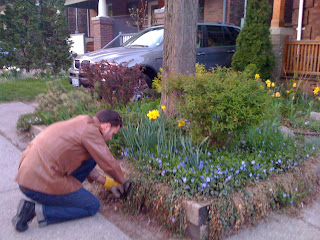 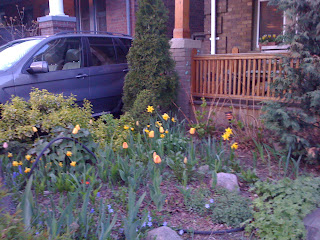 For some reason a die off of the Periwinkle, but it is tough and and coming back nicely this year.  Bulbs you'll find are of course daffodils, lots of grape hyacinth and some tulips.  I am generally not a planter of tulips (if I go to the trouble, I want them to come back year after year, after year), but I really like these Rembrandt Tulips due to their blended colours.
Since this was taken I also added both Snow and Giant Crocus - I'll have to get a photo of them next year.  There are a few Snow Drops from the previous owner that I plan to add to this fall. 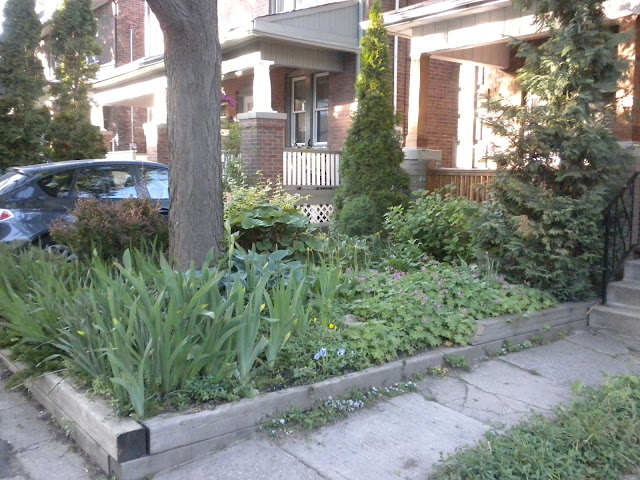 You can see that the Spirea has been banished to the cottage (it just didn't feel right to have such a large shrub at the front) and has been replaced with Iris which I had to dig up last year anyway when I investigated why there were so few blooms and found this nasty pest.  I dug em all up, cut off the rotten chunks, rinsed and replanted. 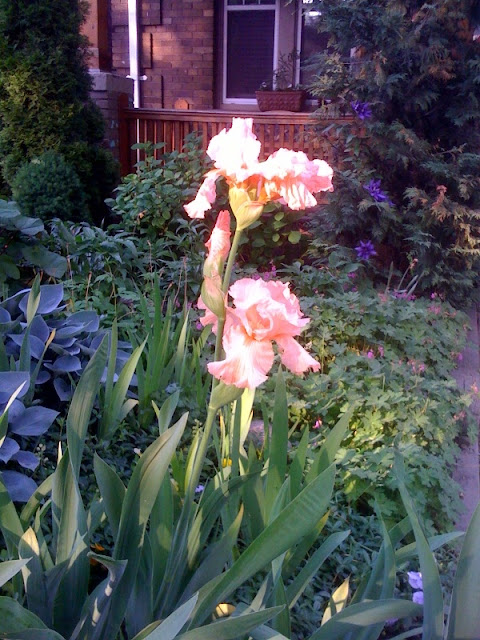 Though not too many blooms this year they look healthy so I am going to assume they are fine and recuperating and will bloom more next year. I am ever hopeful.

Something I am proud of is the Clematis growing up the weeping cedar on the right.  I planted one beneath each of the evergreens last year and this one is a success, the other not.  I think the conical evergreen is too dense and it did not get enough sun, but I will add a second one to this tree.  I just love the effect of having gorgeous big purple blooms on my evergreen! 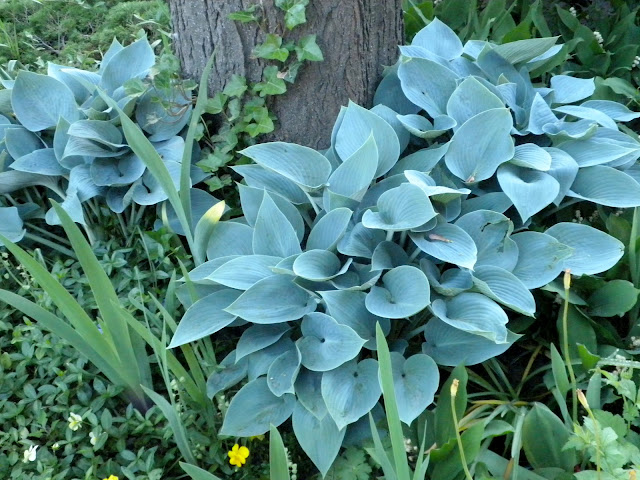 When we moved in there was a single Blue Hosta at the base of the tree and one of the first things I did was to divide it in three.  Now I have the three in a nice "U" shape around the tree, each of them as big or bigger than the original 6 years later.

Last year I planted the English Ivy at the base of the Thornless Honeylocust.  It feels practically tropical to me to have vines growing up trees, but I have to admit I am a bit torn given I have read it is considered invasive, though commonly used in my neighbourhood.  Every space has to be considered in a small garden and 'up' just made sense.  Once it is more established I will likely grow some Morning Glory that will be able to use it to pull themselves up.  I know they reseed like crazy, but they are so pretty I can't help myself. 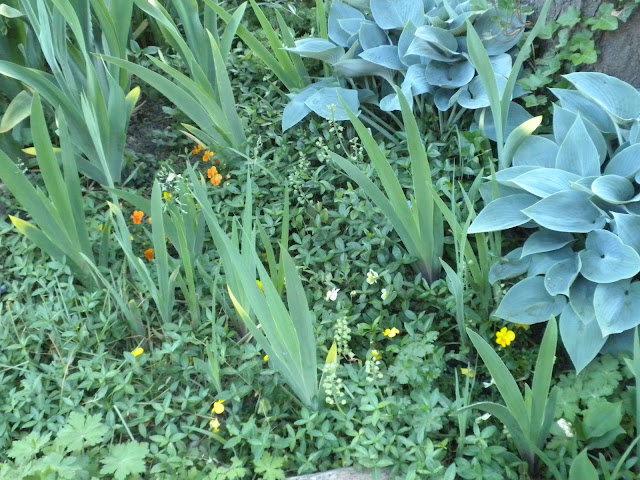 An innovation I am pleased with this year is how I added violets to the periwinkle when I had some extras.  I love periwinkle.  Looks great when it blooms and has great foliage the rest of the time, but you have to admit that the blooms from the violets don't hurt.  It is like having an ever-blooming periwinkle (in yellows and oranges) since you cannot see the violet's foliage.  And who knows, maybe they will self-seed and live on harmoniously together for all time.  We shall see. 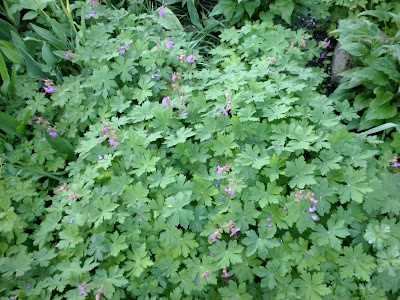 The hardy geranium doesn't have brilliant flowers, but it does have some, spreads quickly and its foliage stays green and healthy for a long time.  I got a cutting from this plant from a friend of my sister in Victoria and last week took some to my mother's in Winnipeg.  This plant is getting around!  Check out how little there was in the 2010 photo (with the tulips).  At the rate it grows I'll have to find other places for it soon.

That won't be a problem though, it is where a little Guerrilla gardening comes in!
Posted by astudentgardener at 23:05