The space between our laneway and our driveway is a great example of my goal to make the cottage feel exceptionally green and alive but not necessarily feel like a garden at all.

It is also a great example of taking my cue from the existing space.

When we moved in, 'Periwinkle Hill' (above) already existed, Lily of the Valley, Daffodils and all.  What a great view from the bedrooms!  A green standout in the middle of the brown forest floor.

The space above the driveway on the other hand was just regular forest floor, all leaves and branches.

I started by thinning the trees.  Those under the electrical wires went first, followed by those that were 'twinned' or clearly too crowded.  Then I swept out all the leaves, dead branches and twigs and proceeded to transplant hundreds and hundreds of Periwinkle plugs. 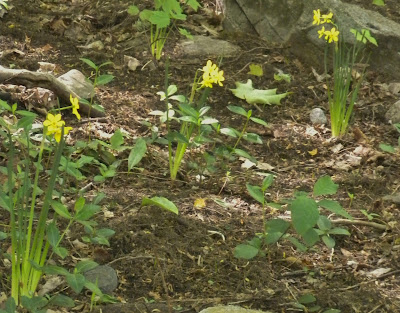 A tip on transplanting Periwinkle (and I assume other mat-forming ground covers): take from the edges of your clump where they just pop right out of the ground vs. the middle where they need to be wrestled out on all sides. 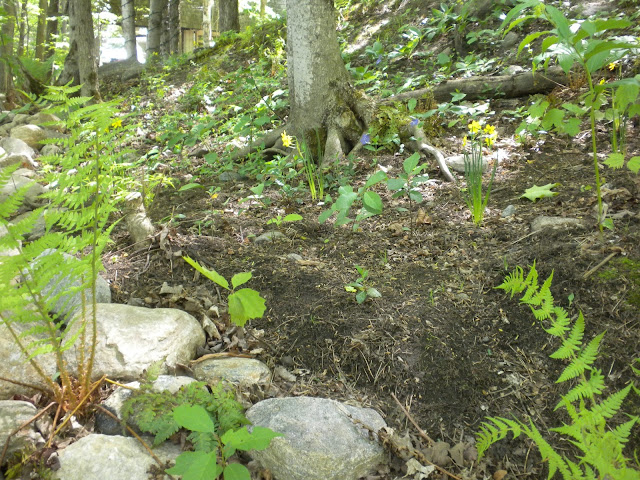 Day after day, summer after summer, I took Periwinkle from where it had been spreading into the driveway and moved it up the hill.

In the  fall I added 2-3 types of Daffodils with various blooming times and Wood Ferns from the forest. When possible I planted some poking up between rocks (above) because it makes it look like they were there first. 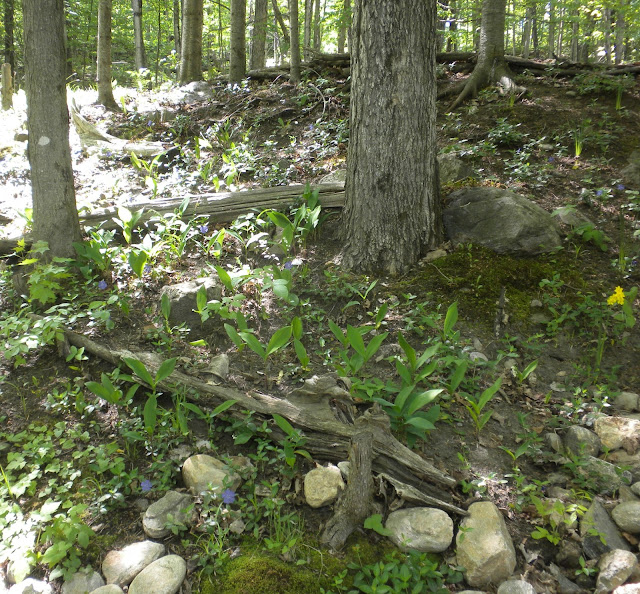 I also transplanted Lily-of-the-Valley from down the hill to up the hill. I was careful to get it on both sides of fallen logs (above)  to convey the idea that it had been there for years. The patch is a carefully planned vertical zigzag that is meant to look random as if it had been slowly making its way downward for years.

I started in the middle of the hill until it was appropriately dense and then worked my way outward with the Periwinkle, rather than making the whole hill lightly covered. I wanted to have impact relatively fast and the way to do it is to concentrate effort.  It is frequently a debate I have with myself when tackling a large area: fill the entire designated area lightly or concentrate in one area and then spread outwards?

Eventually though (after hundreds and hundreds of transplants) I became satisfied that within a few years this area would be as I envisaged it (just like Periwinkle Hill) and allowed myself to move on and tackle other areas.  I do not really know how fast Periwinkle grows so it will be an interesting experiment to see how quickly we can get that top part looking as luxurious and green as the hill below and merge it all into one big garden - that we just happen to park in the middle of.