Toronto has a city-wide composting program, so separating my compostables from my trash has become second nature. Here in Winnipeg there is no municipal program, but there are two composters that came with the house...one is in the lane and the other, presumably for convenience, is closer to the back door.
Too close. 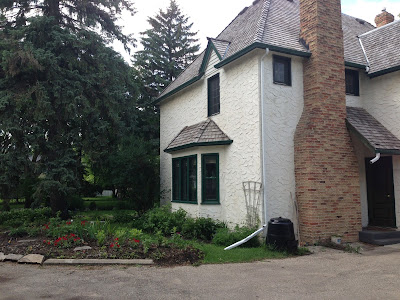 I mean really, what do I want to grab my guests' attention, the Blue Angel Clematis growing up the trellis or the "Mulcher 3000"? 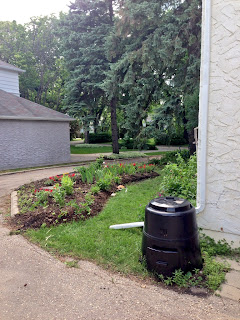 I am a proud composter but even I can see how it may be just a wee bit too prominent.  Since I am in the midst of making that whole side yard into my Sun Garden, the choice is clear.

The funny thing about moving into a new space is that it is someone else's old space.
If we are not careful we can fall into their traps.  For example, when you look at the first photo above, does the composter jump out at you as being 'wrong'? How about after I mentioned it?
I am glad I caught this rogue composter in our first year and moved it into the back lane before we 'got used to it'.

Walks to the lane at thirty below be damned, I am a gardener! 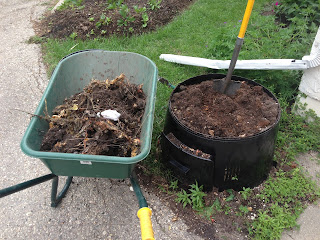 The lid top-half popped off almost as easily as the lid, which is to say very easily, and while the top half was not fully composted... 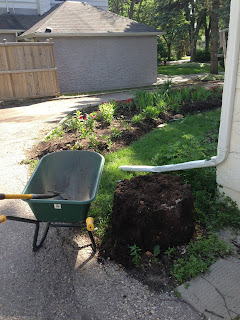 the entire bottom half was nothing but 'black gold'.

Actually moving the composter was much simpler than I expected it would be and resulted in more lovely compost than I imagined. Yeah! 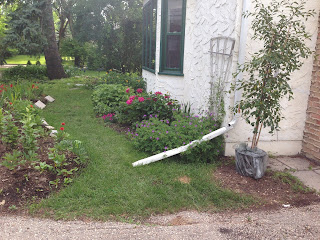 In the space it left we could have continued the grass path but I chose instead to add a fruit tree. Rather than having the garden putter out ignominiously into the driveway I want it demarcated with a bang.

In this case a triad of three kinds of cherries: Valentine, Romeo & Carmine Jewel. At the base I am going to add hardy geranium by dividing the clump growing immediately beside it at the base of the trellis. Like all of the perennials here it has not been divided in years.

Having the cherry tree shoot up out of the middle of the blooming geranium will look a-maz-ing!
Can you picture it?