ANATOMY OF A SUN GARDEN - breaking the rules

A virtual tour of my "South Lasagna garden" which I am officially renaming my "Sun Garden".

Although some experts suggest limiting use of the sunny colours to "no more than about 10 to 15 percent of really warm or hot colors for best design" I have my own ideas on this matter.  In my Ontario gardens I had too much shade to grow many of the most colourful flowering plants and now that I have sun I am embracing them wholeheartedly in what I am calling my Sun Garden.  It sure has changed a lot in the last month, including the removal of cedars that had come with the house.

My Sun Garden is primarily reds, oranges and yellows with perhaps 10-15 percent purples - so take that experts!
Another rule I have read is that clumps look better than rows. But since my garden has such strongly defined borders being next to the driveway I have chosen to emphasize them by planting in rows all along the border. Nasturtium seedlings line the driveway and 11 Blanket Flowers line the grass path, alternating between "Arizona Sun", "Red Sun".

(Ignore the stones, they are only placeholders until I find something I really like to build up the edge.) 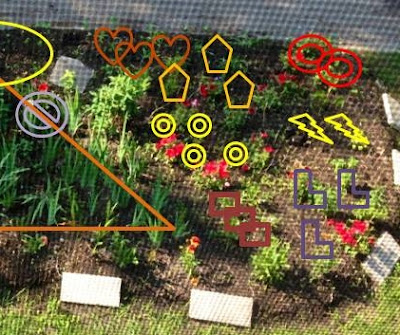 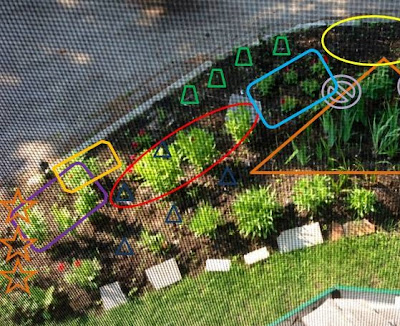 Spread across the whole garden (except for amongst the stalks of Iris and Crocosmia in the centre) are Scarlet Flax seeds.
And finally, other seeds I tried but do not believe are germinating include a chocolate-orange Rudbeckia, Cherry Brandy Rudbeckia (red) and Brilliant Oriental Poppy (red) as well as some gentian blue Anagallis Mouron for contrast.

So as you can see, I am fully embracing hot summer colours in my "Sun Garden".  I will keep you posted with photos all summer and you can be the judge if it "sizzles" or is 'too hot to handle'.

***
Sharing with Garden Tuesday, Our World Tuesday and Nature Notes.