I'm in love with Sundrops. 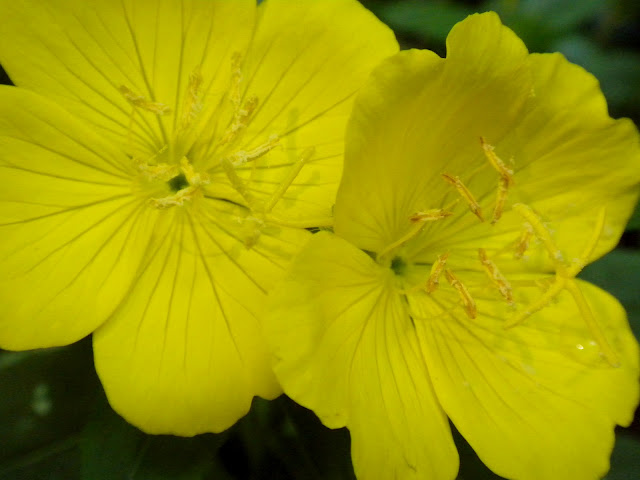 After reading that the Sundrop is the same thing as Evening Primrose I further investigated and learned that they are both Oenothera. Does this mean that I could use my Sundrops for herbal remedies?  I don't think I'll ever find out since these don't look like they will grow in Zone 3 where I am headed and I couldn't possibly make the time to test it pre-move.
Do tell if you know already. 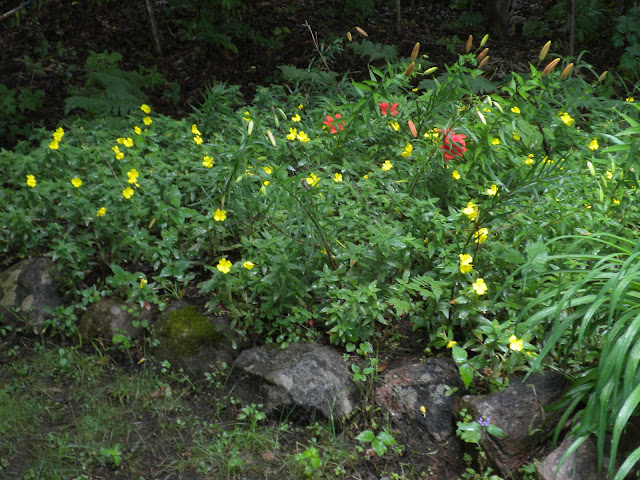 Since they are so densely packed in the Lily Garden, I tested them in 3 different locations last year and have been blown-away by the results.  I've just learned it is possible for them to overlap with the lilies in their blooming; the Asiatic Lilies typically bloom after the Sundrops, but this year things are arriving early after the summery burst that was April. 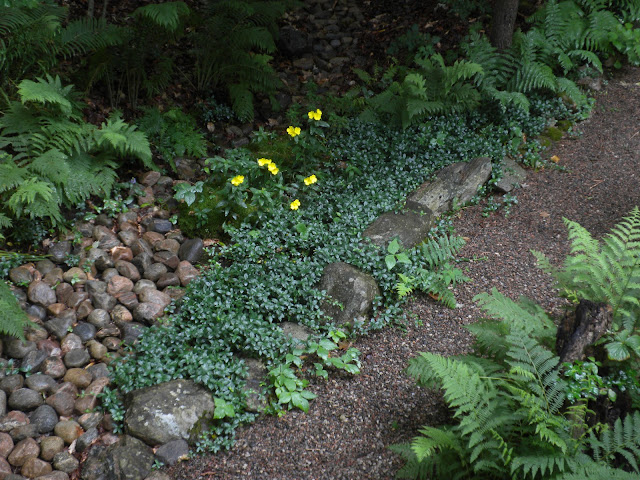 I have to admit their success in this moist, green location was a surprise.  I didn't even plant the first one, it just appeared two years ago, perhaps travelling with soil when I added the moss "buttons" that summer...and boy did it ever make an stand out in that otherwise subdued space.
Look at how the yellow pops in the shot above!

You can not walk down that path with averted gaze.
They draw you in.

Seeing that just one could survive was enough to inspire, but I still took a measured approach when I added this spot to my test list last year thinking: more can only be better. 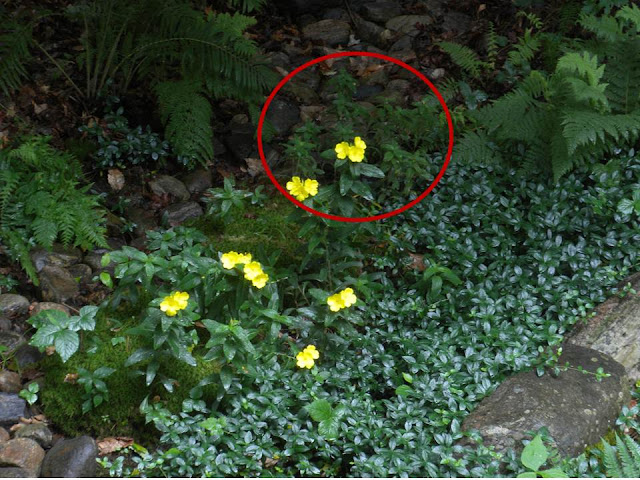 I am so pleased with how the yellow stands out amongst the green that I've already added even more towards the back  (you can see these new non-blooming ones are half the size  of the ones in the foreground that started here last year).


2) LakeFront Garden - They have doubled or tripled in size and number of blooms. 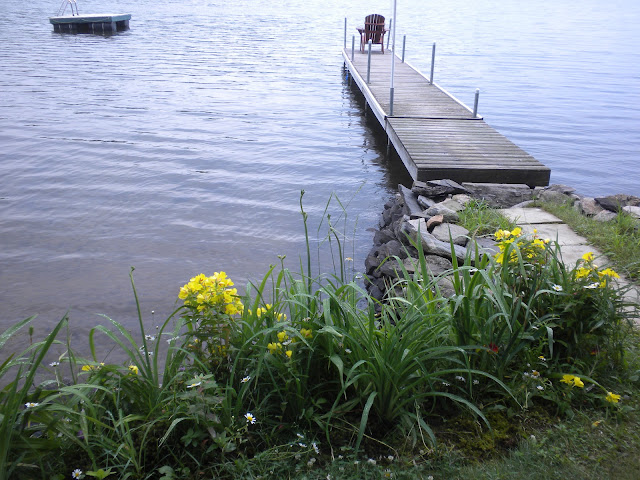 I almost feel guilty keeping them in the Lily Garden. Almost. But not quite since that garden is rife with them. I will use it as a nursery and take plants, and I mean lots of plants, later this week and move them to the locations from each of the tests I ran last year.

(August update - before I left the cottage I was ambitious and switched out all of the Sundrops I could. They just simply weren't getting enough light and will look amazing elsewhere). 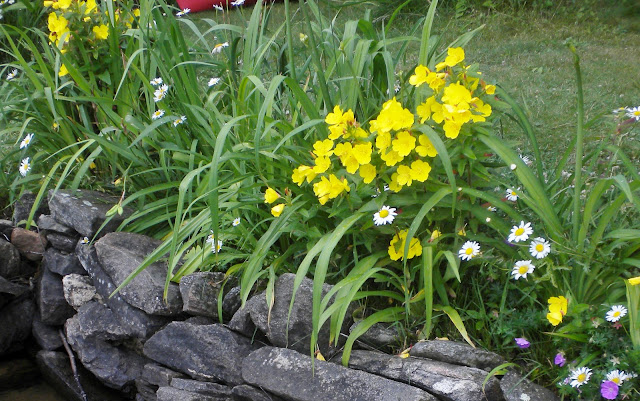 (south side, stone stairs into lake)

If the Lily Garden looks a little patchy next year as a result, so be it, they will come back and fill in again given enough time. 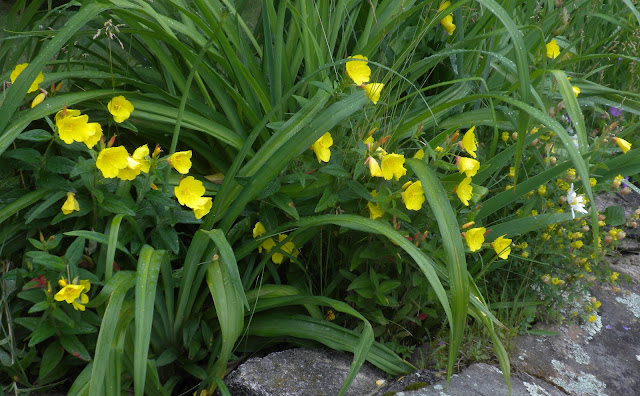 (north side, stone stairs into lake)

Don't worry, even though the LakeFront Garden is 100 feet long, I won't run out.

3) Lily Garden - Same size as before. 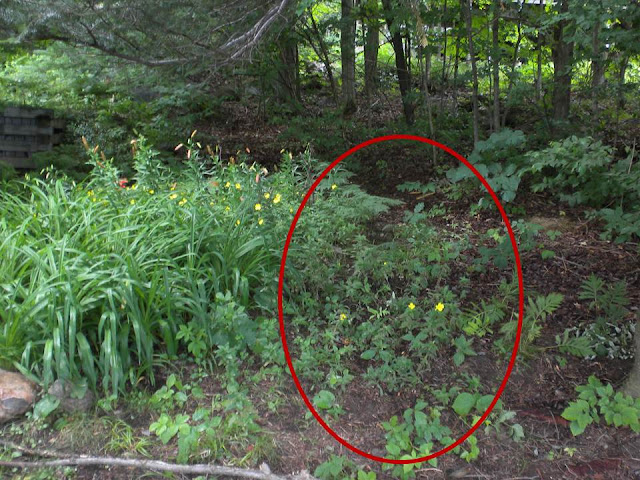 "Now wait a minute, isn't that where they came from?"  Yes, but they were only growing behind the daylilies, away from the water.  I planted 3-4 under the fir tree beside the Lily Garden in what is pretty dry earth (as might be expected) and they came back just fine.  Not 'new-and-improved' like the other test sites, but still they came back.  And this is no less exciting because it means that I can now surround the daylilies with Sundrops and expand the boundaries of the Lily Garden.

The Daylilies were always a bit too tall to be in the 'front'of the garden and when the lake dominates one side of the property there is always a feeling like lake-side is the front side, despite the stone border running perpendicular to the lake.
Most people would not be aware of it, but I think it will make an enormous difference.

***
P.S. I am sharing this link with "We Did it Wednesday", "Outdoor Wednesday" and "Outdoor Spaces", why not check them out?
Posted by astudentgardener at 23:35