In a previous post I talked about the Crocus and Allium I bought, but it wasn't until recently that I finally got around to planting them all.  Late in the season, so we will see how they do next year.

The ground was not frozen, so they should survive, right?
Let us hope so.

I planted the purple Allium in front of the house on the North side.
(The white Allium that were part of the purple and white collections I bought have been planted in the South garden, more on that later.) 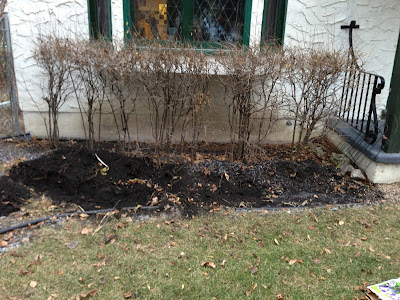 I started digging individual holes, but with 39 Allium to plant I quickly realized how much wrist-busting work this was going to be. 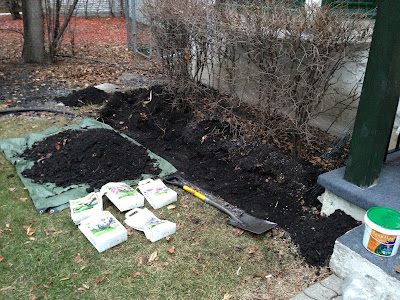 So I put aside the trowel and grabbed a shovel and a tarp. (I previously learned not to put soil directly on the lawn to avoid a mess.  I dug a big trench in front of the hedge, deep enough for the smaller Allium (Atropurpureum and Purple Sensation), and then I used the trowel again to make 9 deeper holes for the larger Allium (3 Globemaster and 6 His Excellency). 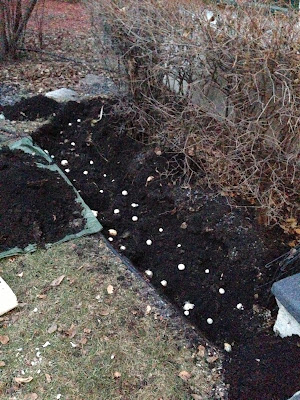 I took the 10" apart direction seriously.  In the picture above I already planted the larger bulbs. Having dug the trench allowed me to place the bulbs first then shift them around before covering them with soil. 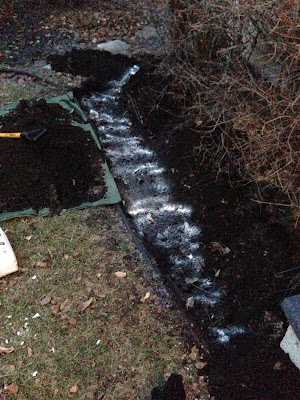 After covering them I put down some bone meal and then another light layer of soil.

And then I put down 80 Mixed Crocus.
It is the first time I have ever layered bulbs like this and I have to say that digging the trench in the end was much easier than trying to plant all of the Allium and then the Crocus in the same small area.
A highly recommended strategy.

Stay tuned for a colourful update in June.
Posted by astudentgardener at 22:59