Between us and our neighbour to the North is my lily garden, sporting Asiatic, Oriental, Giant Tree and common orange day lilies.

When we first moved in there were no lilies there at all, just Ferns and Sundrops; where the day lilies are in the pic below was just earth.  Perhaps the leaves from the lawn had been raked and left here?
I liberated day lilies from elsewhere on the property where they were growing in the shade -  healthy foliage but no blooms - and I added a few rocks to wrap them around and add more curve.
(I am not one for straight lines.)

I wanted something in there quickly to green-up the spot, uncertain if they would get enough sun to bloom and in fact they don't bloom as much as those along the driveway or on the water. 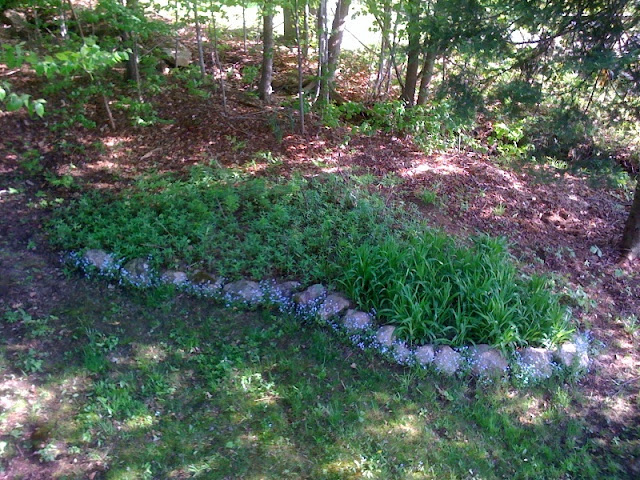 Starting last spring, I gathered up all of the forget-me-nots that were showered across the lawn and transplanted them in amongst the rocks making the border that much better.  Some came back in place while others self-seeded nearby which was good enough for me. They are easy to transplant. 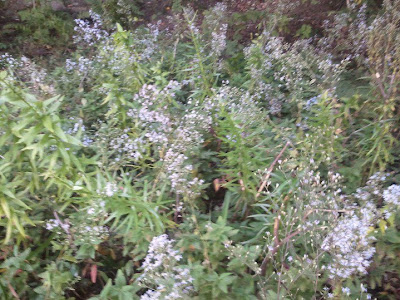 This photo is too close up and blurry, but it shows the wild asters I gathered from the side of the road last year and transplanted, giving the whole thing I nice purple shimmer.  Hopefully they will come back this year. It was a bit of an experiment.
[December update: we left the cottage in July and I never got to find out if they bloomed, though I could see many of the plants returning in July.] 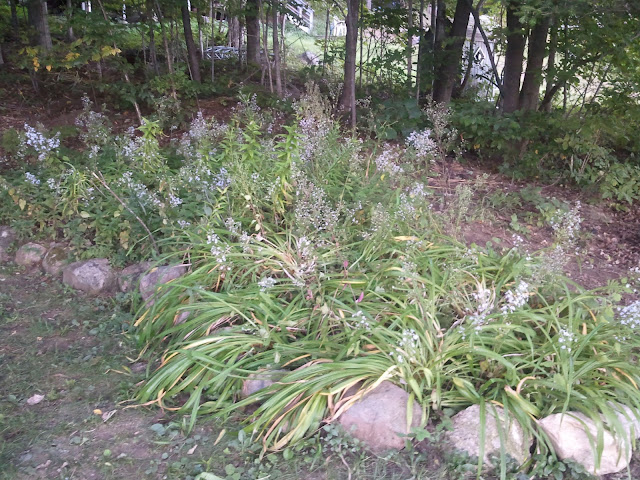 I know I should not have moved them when they were in bloom, but it was like I had somehow never noticed them before in the 4 years we'd been coming here and I couldn't wait another season.  There were just so many that I took a chance.  This year I'll be able to recognize the plant before it blooms to add even more and give it a better chance of survival. 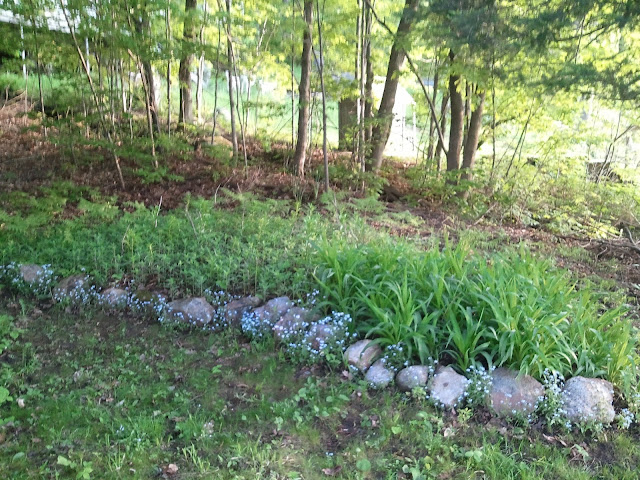 Pretty similar this year but if you look closely you can see that there was a layer of Braken Fern growing in there providing an unneeded layer of shade that I have since removed.  I love most ferns but find this one to be too common and hard to transplant with its deep tap root - so out it comes!
Posted by astudentgardener at 10:05